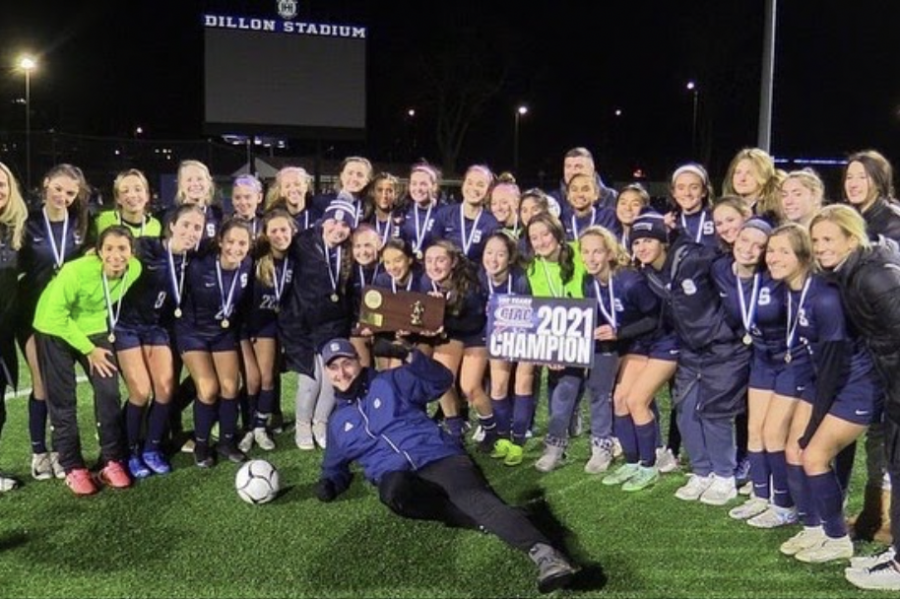 The Staples girls’ soccer team ended the 2021 season with a 14-3-5 record and won the FCIAC championship and co-won the state championship with Wilton.

After a 9-2-4 record in the regular season, Staples girls’ soccer went on to win the FCIAC  championship over Wilton and then shared the title of class LL state co-champions with Wilton, ending the season with a 14-3-5 record.

Leading up to the two big games, the team prepared with similar, but more intense practices compared to their previous ones. Captain Gabby Gonzales ’22 worked with the team to discuss game plans in order to go into the games as prepared as possible.

“We didn’t do much differently [in practice] however we did discuss the specific game plan depending on the game,” Gonzales said. “The practices leading up to those last couple of games were more focused and intense because of the severity of the games.”

As expected, the team felt extra pressure going into the championship games due to the significance of them. However, for each player the nature of the pressure was different. For Annabel Edwards ’25 the pressure she felt going into the state final was mostly coming from herself because it was the final game of the season.

“Personally, I felt a lot of pressure from myself to perform well, knowing this was my last game of the season and that everyone was watching,” Edwards said. “But everyone around me was so supportive and it was only me that really put the pressure on.”

However, Evelyn Chudowsky ’24 felt like the fact that they were representing Staples came with a lot of pressure.

“You’re representing your school and that’s a really big deal, but also you’re doing it with your team and I think that’s most important,” Chudowsky said.

“I think we were more disappointed that the season was coming to an end than being co-champs with Wilton,” Dewitt said. “I was personally very proud of the team and how far we’d come.”

As it was her last state final with the Staples girls’ soccer team, Gonzales had a hard time accepting that they had co-won with Wilton, however she realized all the effort her and her team had put in.

“Co-winning states was definitely a hard pill to swallow. I think, at first, none of us really knew how to act,” Gonzales said. “But in the end, we realized […]how much we have to be proud of so we were able to celebrate this title.”

After every win the team celebrates by having a singalong on the bus ride home. Edwards realized that the bus ride home after the state final was extra special because it was the last ride of the season.

“The bus rides back after big moments are always loud and exciting, and I think this one was even more special because it was our last one,” Edwards said. “I don’t think anyone wanted to leave that bus despite the cold.”

In order to celebrate their victory and successful season, the team blasted the perfect song to represent their success.

“We celebrated by screaming and singing on the bus ride home,” Gonzales said. “We walked on the bus and the first song we put on was ‘We are the Champions.’”