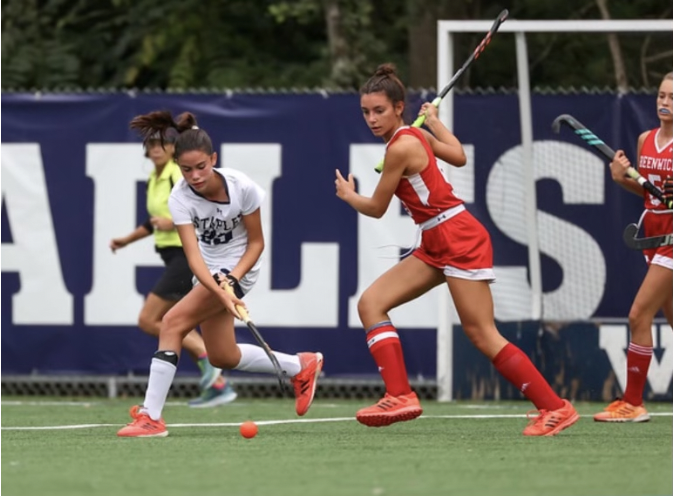 Sofia Fidalgo-Schioppa ’25, left, steals the ball from a Greenwich player.

Ten seconds left in the game. The ball glides from stick to stick as it paces up and down the field. Suddenly the ball is rescued, raced up the field and shot directly between the goalies legs, by Sofia Fidalgo-Schioppa ’25. Another win for Staples!

In only her first year of high school, Fidalgo-Schioppa has brought her love and dedication for field hockey to the Staples varsity field hockey team. She works harmoniously with her teammates and brings a new level of ability to the team.

“She’s definitely helped a lot with the attack,” Kathryn Asiel ’24, who witnesses Fidalgo-Shioppa’s skill first hand, said. “I think that she distributes the ball really really well from her midfield position and is also just aggressive, and a star athlete overall.”

Five years ago, Fidalgo-Schioppa made the switch from the beam to the field. After leaving competitive gymnastics at Arena Gymnastics, she was inspired by her mother, a former player of the Argentinian National Field Hockey Team, to pick up a stick.

Fidalgo-Schioppa continued to express her love for the sport by playing through Westport PAL Field Hockey and through AGH Field Hockey Club in Greenwich, Connecticut. This fall, she had the opportunity to try out for Staples Field Hockey, where she made varsity.

Since she started playing for Staples field hockey, she has yet to disappoint her teammates.

“When I’m playing a game I’m focused on always winning with my team,” Fidalgo-Schioppa said when she was asked about what she is feeling when she is on the field. “I love the competitive environment and the excitement during big games.”

After being chosen for the U16 National Field Hockey Selection Camp, she hopes to continue her field hockey career by being selected to make their U16 team. However, while she is still in high school, her goal is to win States and the FCIACs with her team at Staples.

Fidalgo-Schioppa has proven to be an important asset to Staples field hockey as she continues to bring her sportsmanship and dedication to the sport to the team.

“I think that she is an amazing player,” Asiel said. “Definitely key to our success this year.”