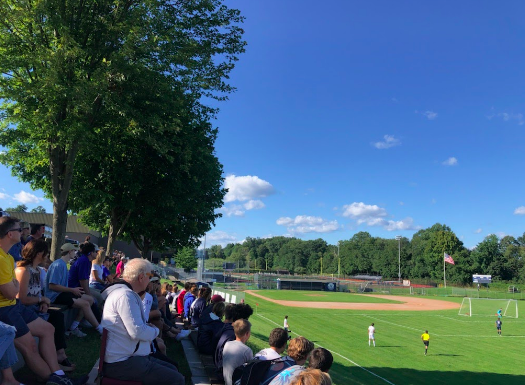 Fans of all ages, from player’s parents to packs of Staples students, came out to support the boys’ soccer team. Many players afterwards felt the crowd played a vital role in their victory.

The Staples boys’ soccer team dominated their opening game against Ridgefield High School on Sept. 10. Scoring consistently throughout the two halves, the Wreckers were able to bring home a 5-0 win on their home turf, Albie Loeffler Field.

Fielding 10 seniors and one  junior, the experienced starters were in control from the start. Just five minutes in, Jaden Mueller ’22 passed the ball  to winger Murilo Moreno ’22 who finished cleanly off the far post.

This goal was quickly followed by another when defender Jack Foster’s ’22 free kick met the head of Reese Watkins ’22 in the 8th minute.

Tri-captain Bruno Guiduli ’22 feels that his team was successful in keeping the Ridgefield Tigers on their toes during the first 40 minutes.

“We came out with a lot of intensity and were pressing from the start,” Guiduli said. “Those first few goals allowed us to finish the game off in the second half.”

As the first half came to an end, Staples was able to grab one more goal six  minutes before the break. A new addition to the team, Dylan Hoke ’24, was successful in his shot from afar, closing out the half 3-0.

The new half came with new players, many of whom got their first touches on the varsity squad. Matthew Shackelford’s ’23 first possession was soon followed by a goal in the 75th minute.

The Wreckers continued to hold their own through the final whistle, sealing the deal when Mueller finished with 10 seconds left on the clock to end the game 5-0.

After restricted attendance last season due to COVID-19, all Staples sports have felt the impact with fans returning. Following the game, the players credited the crowd’s lively and supportive presence with their win.

“We hope to continue seeing a packed hill at every home game as it was vital in the win today,” Foster said.

Winger Matt Jordan ’22 is eager to experience this season with all it’s new additions, including their renovated equipment shed.

“I am looking forward to using our new locker room before our home games and to play a full 15 game season,” he said.

The Wreckers face off at New Canaan under the lights at 6:

30 on Sept. 14 and are back at home to battle league rival, Greenwich, at 11:30 on Sept. 18. All of their future games can be live streamed here if not attended in person.