Athletes not letting COVID-19 stop them from staying fit 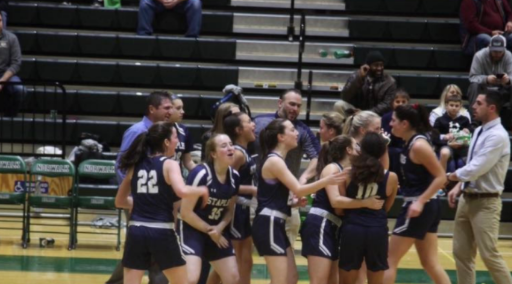 The Staples girls' basketball team celebrating after upsetting Norwalk on the road.

In a normal year, high school winter athletes would be kicking off their seasons this month, but with COVID-19, nothing has been near normal. The CIAC Executive Director Glenn Lugarini postponed the start of winter sports to Jan. 19. Last winter Staples’ sports exceeded expectations as both of the basketball teams entered playoff competition and the wrestling squad medaled many wrestlers during the state tournament.
The season, however, did not end the way most teams dreamed of it finishing. The girls’ basketball team was eyeing a spot at Mohegan Sun to battle for a state championship before COVID-19 struck Connecticut causing the tournament to be canceled.
This news struck the hearts of the team that is looking to stay dominant this winter. To do that though, they need to stay ready even with a global pandemic at their hands.
“I have been trying to maintain my endurance by running everyday during these two months in which our season has been delayed,” Nicole Holmes ’21 said. “Our team has been very big on emphasizing weight lifting in our program this year so I have been lifting in my basement.”
Holmes, who is entering her fourth year on the varsity team, knows the importance of staying conditioned and prepared for a long basketball season.
“Our coach has been trying to find gyms or weight rooms in which four of us could go in at a time; however, it has been very difficult to find either,” Holmes said. “The only thing we have really been able to do is stay in shape and practice our ball handling.”
Similarly, the Wrestling team is coming off a very successful season where they finished 22-5, placing them third in the FCIAC. Finding space for conditioning has been a bit smoother sailing for the wrestlers during their long hiatus.
“We have been meeting three times a week at the field to do body weight and conditions exercises,” Owen Clarke ’21 said. “ We also meet with ATP (A Team Performance and Chiropractic) at their gym in Norwalk twice a week for weight lifting.”
Clarke is a two sport captain for the football and wrestling team at Staples and is not new to the structure of a COVID-19 preseason.
“The team has been doing socially distant captain practices and zoom workouts to stay in shape during COVID,” Clarke said. “In the fall we were able to wrestle at a gym but when football got cancelled, that did too.”
Both Holmes and Clarke are accustomed to staying in shape for a long varsity season, but both are still trying to keep working hard as COVID-19 throws obstacles their way. Staples is hoping for a winter season to begin during mid January, but with a rise in COVID-19 cases, only time will tell.