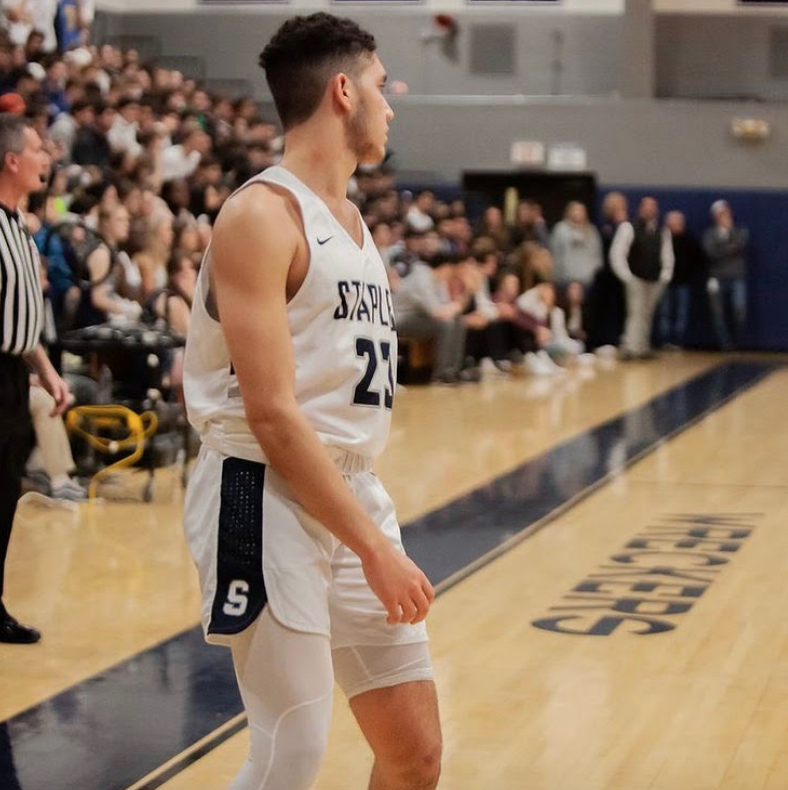 Lucas Basich ’21 was named a captain for this upcoming season. He has been an integral part of the team for the last two years.

The Staples boys’ basketball team is preparing for anything in a season filled with uncertainty. Recently, it was announced that the season would look a little differently than expected.

In mid-November, Governor Lamont announced various new rules and regulations that would pertain to the winter sports seasons. There were two major announcements applicable to the basketball season. First, all players and coaches must wear a mask at all times during practices and games. Second, the season will be delayed and on an alternate schedule beginning Jan. 19.

“The season is definitely gonna be a lot weirder this year considering we are playing a limited amount of games,” Justin Honig ’21 said, “and we have to wear masks throughout the entire game.”

COVID-19 has affected all sports differently, but the impact is being felt heavily on the hardwood. Basketball will be the second sport thus far with mandatory mask wearing while playing. The other sport to do so was girls’ volleyball during the fall.

“I think it’s definitely a little adversity,” Senior captain Lucas Basich ’21 said, “but our program has handled adversity well in the past so I believe we’ll be ready to go by the time the season starts.”
Nonetheless, the Wreckers have continued practicing throughout the offseason with the proper COVID-19 precautions.

“We’ve been having practices three times a week in groups of four wearing masks,” Basich said. “We’re doing whatever we can to be best prepared for the season however it looks.”

The Wreckers will be returning just one starter, but a young supporting cast of sophomores and juniors gives a glimpse of potential.

“We have a great team and a great coaching staff to support us,” JT Shapiro ’22 said.

The team will have plenty of obstacles this season, but they are a team equipped to overcome.

“We’re all just dying to get out there and play alongside our teammates,” Sean Clarke ’21 said.

Last year, the boys basketball team finished the regular season with an overall record of 14-6. They were unable to participate in the state tournament as Staples shut down just prior to what would’ve been their first game.