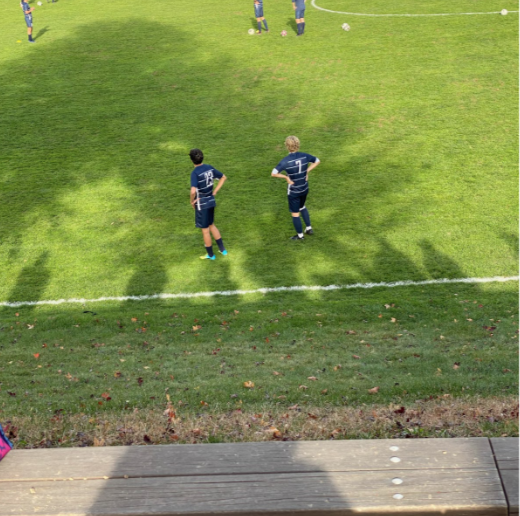 Alan Fiore (right) looks on to Loeffler Field prior to a contest against Ridgefield, in which he scored two of his four goals so far on the year.

All three of these players have been working on perfecting their craft over the extended off-season. Beck, a captain of the football team, has made football in Westport a priority his whole life.

“My work ethic is driven by my passion for the team and the program,” Beck said. “I was going to Staples football games before I could remember, and I have held the team very highly since I was a kid.”

Fellow captain Sam Milberg ’21 knows just how much Beck means to the team.

“Henry is a great leader on and off the field,” Milberg said. “He has this special thing to him where no matter what he is doing he is competing.”

The starting running back is looking to pick up just where he left off last year, having an effective season with the ball in his hands.

“I’m looking forward to having the chance to compete,” Beck said. “This team is filled with guys who love to play and we are eager to go against other teams and have the chance to win games.”

Transitioning from the gridiron to the hockey pitch, Boston College commit Laine Ambrose ’21 is also looking to cement a legendary Staples career in her senior season. Ambrose and the Staples field hockey squad are looking to continue their success, coming off of four straight state titles.

“We want to win all 10 of our games convincingly and hope for potential playoff games against strong opponents,” Ambrose said.

Ambrose has been an integral part of the team since her freshman year and is looking to build on that before heading off next year.

“I always try to bring the level up and lead by example,” Ambrose said. “ In games I try to contribute by using my stick skills to get out of difficult situations and open up the field to pass to my teammates.”

Lastly, from one pitch to another, Staples soccer left winger Alan Fiore ’21 is also looking to put together one last methodical season. Fiore will be returning to the varsity team for his second year and is now looking to make an impact as one of the top scoring options.

“I’m looking forward to the playoffs and competing at a high level,” Fiore said. “I try to raise the level of play whenever I get the ball, no matter if it’s in a practice or a game.”

Fiore, just about midway through the season, has been the Wreckers leading goal scorer. In a season like this, preparation was certainly a key factor in his well play.

“Preparation going into this season was a lot more extensive than previous years, due to COVID,” Fiore said, “so our work ethic as a team has really been taken up a notch.”