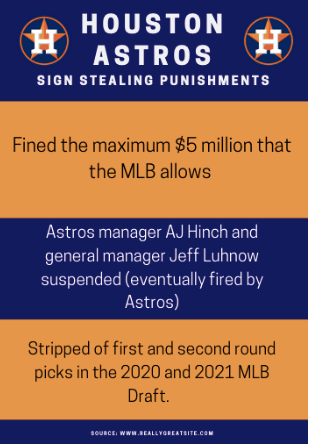 After news broke that the Astros were found guilty of stealing signs during their 2017 and 2019 seasons, the team has been hated by fans from all over the country.

As I watched Jose Altuve hit a monstrous walk-off home run to send the Houston Astros to the World Series and beat the New York Yankees during game six of the 2019 ALCS, I was heartbroken. Although it was painful as a Yankee fan to watch Altuve celebrate his win, it seemed as if the better team won. However, after I heard the Astros were cheating and stealing signs during the 2017 and 2019 seasons, I realized the Yankees and Los Angeles Dodgers weren’t given a fair chance during their playoff games against them.

Major League Baseball (MLB) commissioner Rob Manfred handed the Astros punishments in January. The team was fined $5 million (the highest price MLB allows), their manager AJ Hinch and general manager Jeff Luhnow were suspended for a year and they were stripped of several draft picks.

Even though the commissioner punished the organization, he didn’t punish any players. Because they were willingly involved, the players in particular should be given harsh punishments as precedence for how cheating should be dealt with.

Whether it’s dressing up as them for Halloween, wearing their jerseys or copying their batting stance, kids look up to baseball players as their superheroes. For people who are idolized this much, it’s important that these players are appropriate role models and set a good example.

Specifically, Staples has a championship winning baseball team themselves. While they’re a perfect example of winning a game fair and square, seeing a professional baseball team win the World Series by cheating must make them furious.

Houston Astros players should be severely punished to show young fans there are consequences for their actions. Their decision to cheat shouldn’t be swept under the rug. This should be dealt with head on by giving players more consequences such as suspensions and expensive fines.

Not punishing players allows for thousands of kids to admire terrible role models and gives the impression that cheating is okay. This cheating scandal needs to be used as an example of how kids should not behave and that there will be consequences for your actions.

If Astros players do not receive fair punishments, it could be worse for baseball in general. Not giving them stricter penalties results in millions of angry athletes and fans, but it could also encourage others to cheat without remorse.