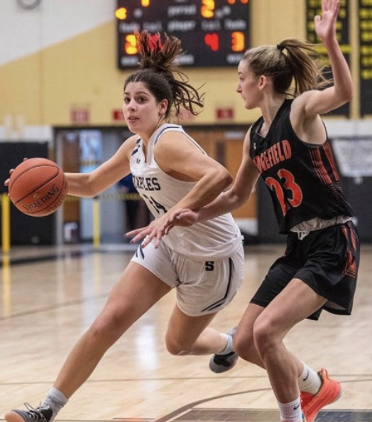 Arianna Gerig ’21 with the ball going in for a layup at Trumbull High School for the FCIAC championship game against the Ridgefield Tigers.

The girls’ basketball FCIAC championship game was a true nailbiter but the team took a hard loss again against Ridgefield with a final score of 50-46 going into double overtime.

“It was a really intense and stressful situation. We started off very weak and the other time started off really strong,” Jen Westphal ’22 said, “and once you start the game like that and give up a lead it’s really hard to get that back.”

Ridgefield was able to hold the lead for the majority of the game; however, in the fourth quarter the game got extremely close. The Wreckers finally took the lead due to a three-pointer by Abby Carter ’20 in the final minutes of the fourth quarter. Ridgefield player Katie Flynn hit a three with 16 seconds left to tie the game to force into a four minute overtime.

In the first overtime the Wreckers were down by two points again until Marley Lopez ’21 made two foul shots adding onto the other eight points she had in the rest of the game. She was able to tie the game at 41-41. This sent the game into double overtime.

In those last few minutes of over double overtime the Wreckers tried to stay as strong as they could but just couldn’t keep the ball away from the Tigers. The game ended with a score of 50-46.

“The fact that the game was as close as it was the whole time made it a very interesting and captivating game,” Sydelle Bernstein ’22 said. “However, along with the excitement of the close score, it also caused me and all the others on the team to be extremely nervous.”

Still optimistic, captain Arianna Gerig ’20, who had 11 points in the game, has hope for her team in the state tournament.

“I am very proud of the team and how far we got,” Gerig said. “Although I am disappointed in the outcome, we have a great opportunity to make up for it in the state tournament.”