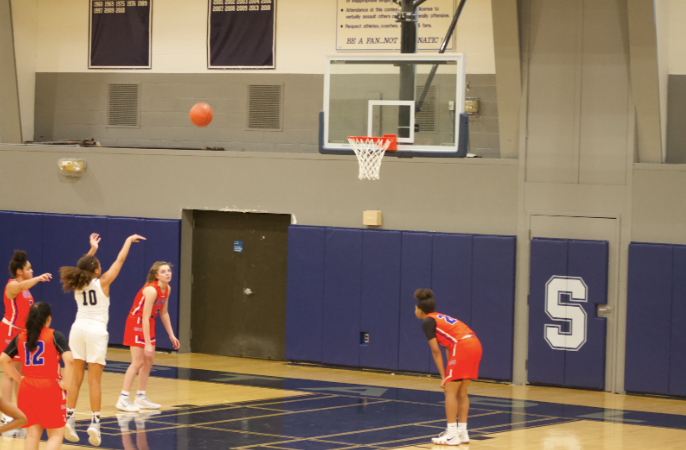 Nicole Holmes ’21 sinking a free throw late in the fourth to ice the game in front of the home crowd.

The Staples girls’ basketball team defeated the Danbury Hatters 59-44 at home on Jan. 8. Going into the game the Wreckers were 5-1 and the Hatters were at 4-1.  Captain Arianna Gerig ’20 was the Wreckers leading scorer with 19 points. Nicole Holmes ’21 had 11 points along with providing energy on the defensive end.

The team knew coming in how big of a game it would be.

“Going into the locker room I said ‘This is it. They knocked us out of FCIAC’s last year. This is our time to shine,”’ Holmes said.

This was the Wreckers toughest test thus far in the season.

“This is our biggest win so far,” Kathleen Cozzi ’20 said. “We knew Danbury is one of the best teams in the FCIAC and we knew we needed to get this big win.”

Staples grabbed a big nine point first quarter lead and went into the half up by eight.

Sydelle Bernstein ’22 had a big three pointer early in the first quarter to help build the lead.

“I think having energy and hyping the team up really gives us a boost,” Bernstein said.

Going into halftime up 29-21 the Wreckers weren’t satisfied.

“The mood going into halftime was to continue building upon the lead we had built,” Jen Westphal ’22 said.

After the break, the lead for Staples remained the same as the third quarter came to a halt at 40-32. The Wreckers got into quite a bit of foul trouble early in the fourth but were able to win in front of their home crowd 59-44.

“We were fighting foul trouble all night,” Head coach Paco Fabian said. “That was tough.”

But despite the foul trouble the Wreckers defense was able to stifle Danbury’s offense and hold them to just 44 points.

“We got some big games coming up,” Cozzi said, “but we proved what type of team we are tonight.”