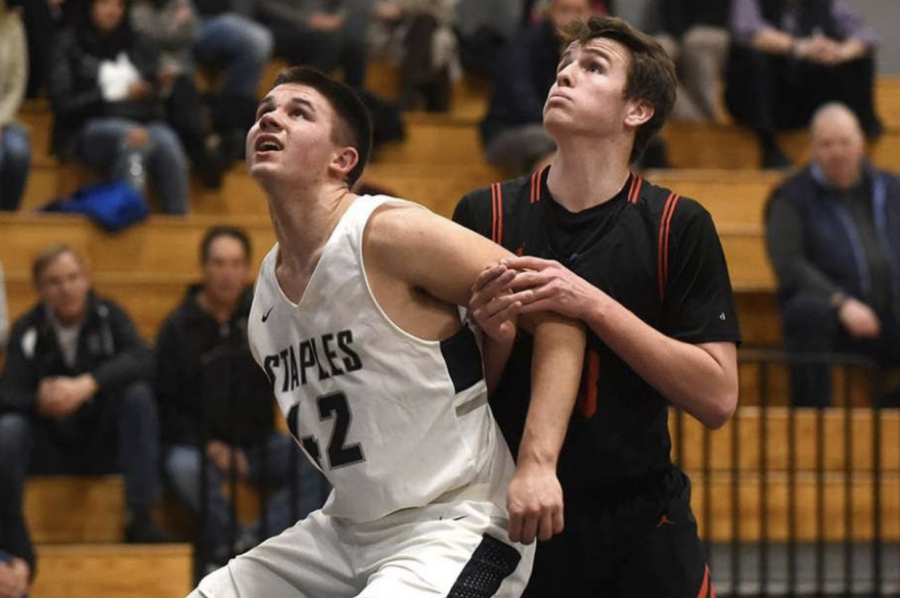 Captain AJ Konstanty ’20 battles down low for a rebound.

The Staples boys’ basketball team showed out in their second game of the season against Weston with a commanding 72-49 win.

On Monday, Dec. 23 the Wreckers took on the Trojans in their first home game of the season. Coming off a 63-50 win against Joel Barlow the week before, the Wreckers looked to have another dominant team win — and that’s exactly what they did.

Despite the slow start that both sides got off to (the score was tied 5-5 with three minutes remaining in the first quarter), Staples was able to take control of the game as they closed out the first half up 19 points.

“When we started full court pressing then we had a nice string of offensive possessions due to steals and forced turnovers,” Konstanty said.

Aside from their full court press, commendable performances from each of the Wreckers starters, as well as their sixth man, is what enabled the team to win this game with ease.

“The play of our starting five was the key in this one,” sixth man Derek Sale ’22 said.

Konstanty and captain Jake Thaw ’20 were the scoring leaders for the team in this one; Thaw tallied a strong 21 points while Konstanty had 15 points and 8 rebounds. To go along with this, sharpshooter Lucas Basich ’21 contributed 14 of his own points. Captains Benny Feuer ’20 and Teddy Dienst ’20 contributed in other ways; Feuer had 8 assists and was able to facilitate the offense while Dienst was a stalworth on defense and added a couple of threes on the offensive end.

Staples hopes to continue their strong play and get even more out of their starters as the season progresses.

“We played well,” Thaw said, “but I know our guys can give more and will down the stretch.”