Autumn Smith continues to prove herself this season 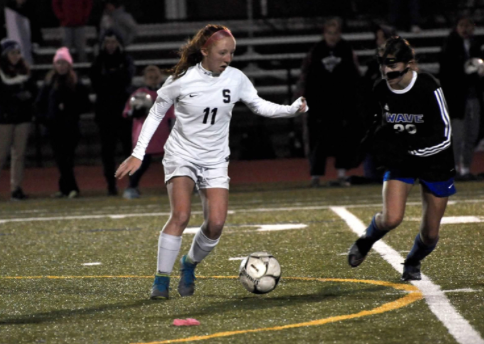 Autumn Smith ’21 has impressed just about anyone who sees her play from the start of her varsity soccer career. The staples midfielder made varsity as a freshman and was named first team All-FCIAC her freshman and sophomore years.

Smith has started off the season hot, with 5 goals and 11 assists in just 10 games. Known for her passing, dribbling and assisting ability, Smith hopes to go above and beyond each and every season.

The Wreckers are one of two undefeated teams in the FCIAC this season, and Smith credits it to offseason changes.

“I think the team is playing really well this year because we have learned to play through our new formation,” Smith said.

The team has had devastating losses in the past two years to Ridgefield in the state finals but still has the talent to win this season.

“I hope to stay undefeated for the rest of the season,” Smith said, “and I want our team to redeem ourselves in the state finals this year.”