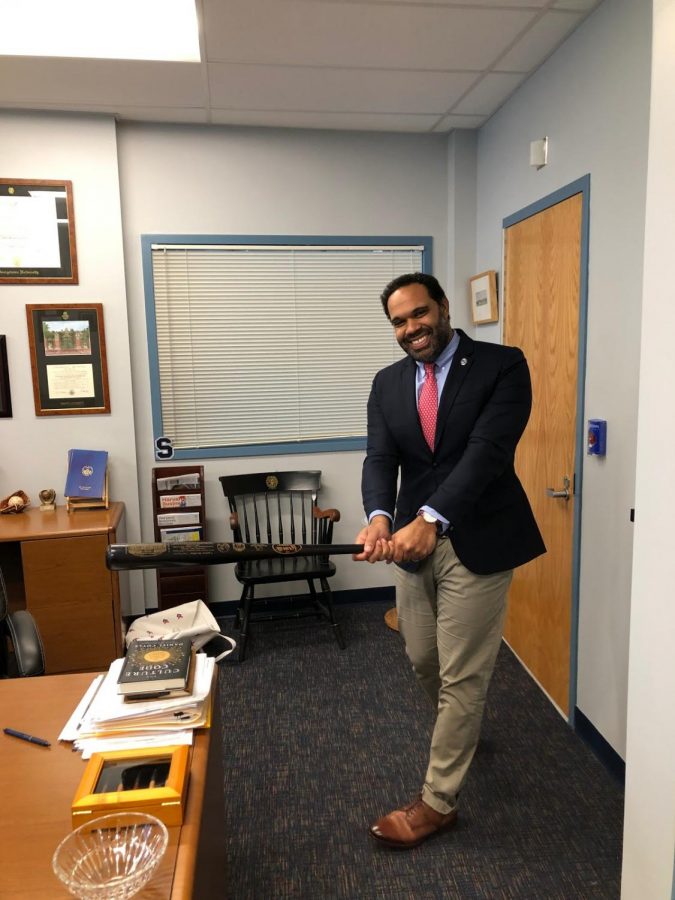 Principal Thomas channeling his old baseball skills with his signature swing. As a Yankee fan, Thomas’s eyes will be glued to the television this October as he watches the Bronx Bombers try to win the World Series for the first time since 2009.

If there was a ball on the ground, Staples’s new Principal Stafford Thomas Jr. would be picking it up. At a young age, he got involved in all kinds of sports. Whether it be football, basketball, baseball or anything he and his friends could find.

“We would play three hours of sports after school,” Thomas said.

This helped Thomas succeed with high school sports as well. As a freshman, he was one of just 18 boys to make the freshman baseball team out of more than 200 who tried out. Besides baseball, he and his friends would play any sport they could as long as they could stay out of the house.

“Football and baseball I played throughout high school and it was a great experience,” Thomas said.

This contributed to how big of a sports fan he is today. Starting in grade school, Thomas has been to the stadium of every single Major League Baseball (MLB) team. As new stadiums are being built Thomas is already making travel plans to get to the new ballparks.

Thomas is also a big fan of college football and thinks it brings a different vibe than the National Football League (NFL) does. Attending a game in Death Valley in Baton Rouge, Louisiana was one of the highlights of his sports fandom career.

“There’s nothing like a night game in Death Valley in Baton Rouge,” Thomas said. “The incredible entrance with Mike the Tiger…it was the loudest stadium I’ve ever been to.”

Thomas was able to attend an LSU game up in Syracuse, New York back in 2015. He was able to see running back Leonard Fournette, the fourth overall pick in the 2017 NFL draft and currently a member of the Jacksonville Jaguars. The excellence on display thoroughly impressed Thomas and only made his love for college football grow.

Football in the fall transitioned to baseball in the spring for Thomas, as his fandom for the Yankees made his love for baseball grow. Thomas keeps up with the Bronx Bombers as much as he can, but he admitted its been much harder since school started in late August. He became such a big fan of the Yankees because of how much baseball he played as a kid. His fandom only grew as Thomas entered high school, where he attended an all-boys high school on Long Island where sports were the number one priority of almost everyone.

“Coming from a school with so few students that you had to play sports,” Thomas said, “I had to transition to a school where sports were the number one priority, and I was lucky enough to play multiple sports throughout high school.”