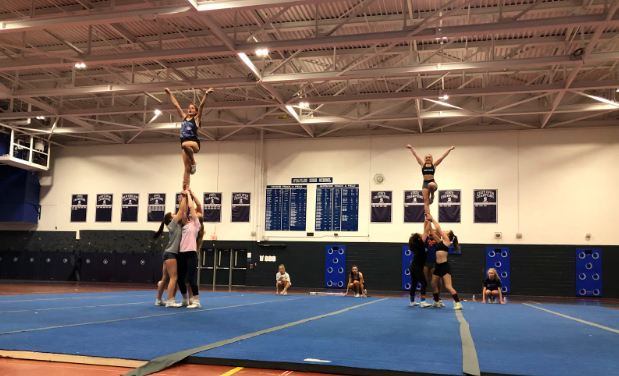 The all-girl cheerleading team practices partner stunts in preparation for their upcoming competition on Feb. 9, the Warde Winer Challenge. Avery Tucker ’22 and Daniella Gat ’20 are the teams two flyers.

In “Bring It On” and “Glee” cheerleaders are peppy, popular, ditzy girls, walking the halls alongside football players. Defying these cliche productions, the Staples cheerleading team faces strenuous, three-hour practices filled with flipping, stunting and conditioning to prepare for weekly competitions during the winter season. The team undoubtedly works hard, but now the stakes have been raised.

Staples cheer had been all-girl for years, but at the start of the 2017-2018 school year, two junior boys were the teams newest addition, placing Staples in the co-ed category. But, due to both boys leaving the team this year, Staples cheer has reverted back to their all-girl roots. They will now be competing against more schools and having to rework their routine to compensate for the loss of athletes.

“We were so used to placing first [last year], so this is definitely a challenge,” Paige Lundquist ’20 said. “But [there’s] nothing the team can’t handle.”

After each competition, the team is given the judges sheets with scores for jumps, cheer, tumbling and stunting. They use the next four days of practice to improve choreography and technique.

“Our routine is constantly changing as people get injured or are absent from practice,” Harley Bonn ’21 said. “It’s a fast pace, but it’s exciting to put out a new version of the same routine each week.”

On Jan. 26, Staples Cheer debuted their all-girl team during the Battle at St. Joes, placing third out of more than 20 teams. On Feb. 2, the team attended FCIACS and claimed a runner-up title. Although not having conquered a first place trophy, they are optimistic about the upcoming competition this weekend.

“I’m really proud of our team so far,” Captain Maddy Crouch ’19 said. “I know if we keep working hard, first place is not out of reach.”