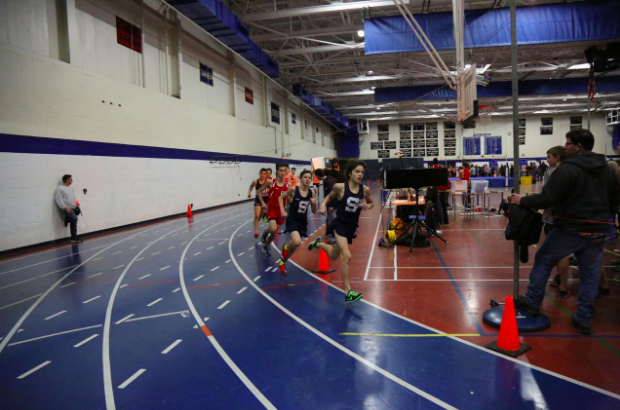 The boys' track team sprints around the track at a meet.

The Staples boys’ indoor track and field team hopes to sustain their success coming off of last year, while making minor improvements in team depth and other areas.

Staples came in third place in the State championships last year, and second place in both the Class LL and FCIAC championships. They were led by well-ranking athletes who went to run and throw at top universities for the upcoming years. While losing these critical athletes could seem detrimental to the team, captain Henry Haas ’19 feels like the team this year will be able to make up for it.

“Although the athletes that graduated last year had lots of talent, I believe our team will be able to fill in those gaps,” Haas said. “We have more depth this year, and the guys we have on the team, specifically in the distance program, are some of the hardest working kids I know.”

One of the goals that Haas wants to team to focus on going into this season is creating a more well-balanced team, and having more of the team members become significant contributions.

“Last year, we fell a bit short in [balancing the team], heavily relying on some areas of the team and letting points slip away at others,” Haas said. “We’re looking to be more well-rounded and commitment towards areas of our team.”

As opposed to only being able to score points on the same events meet after meet, the team is trying to have more opportunities to win events that haven’t been as successful in the past. Captain Luke Lorenz ’19 agreed by hoping to increase scoring from more diverse parts of the team than last year.

The team continues to be led by Coach Laddie Lawrence, who has been with the whole team for the entirety of their high school careers. He recently was inducted into the Fairfield County Sports Hall of Fame as one of the great coaches in Fairfield County.

Lorenz and captain Zach Gladstone ’19has have noticed that absence due to injuries or illnesses throughout winter track is a recurring problem for the Staples team. “This season is tough with not only injuries, but illnesses as well, and I believe that if our team is healthy, we can gain much more from that through training and racing.”,” Lorenz said. Gladstone added that he hopes the team stays healthy and  takes nutrition seriously throughout the season.

The team also prides itself this year on good chemistry, especially between the upperclassmen and underclassmen. “The freshman and the upperclassmen are very friendly, which is something that I have not seen in my four years here,” Lorenz said. “It’s awesome to see that.” As the team practices as a whole, they all spend lots of time working together to improve.

The team calendar says that the team will have four FCIAC qualifying meets at Staples throughout the season. These will be on Dec. 15, Jan. 15, Jan. 12 and Jan. 19. Championship season starts with the FCIAC championships on Jan. 31 at Hillhouse High School, and the team hopes to have a large crowd of athletes there representing Staples. The captains seem excited to improve and begin the season to come.