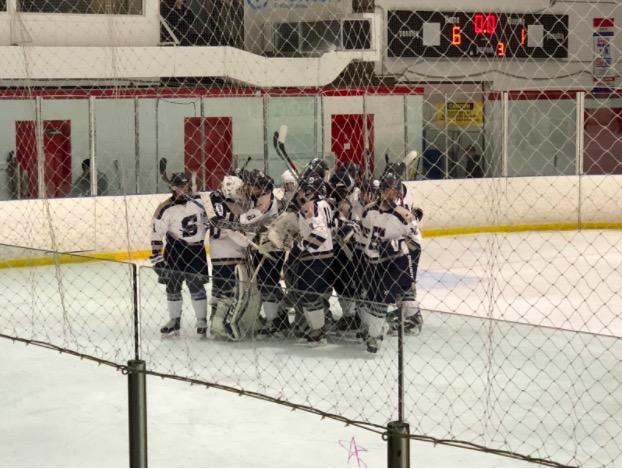 In 2016, the Superfans filled Ingalls Rink at Yale University on a late March afternoon to watch their Wreckers hockey team compete for their first State Championship in program history. After three hard-fought, physical periods against Stamford, the Wreckers walked off the ice without a trophy.

Two years later, the top seeded Wreckers look to redeem themselves after defeating the Masuk High School Panthers 6-1 at the Milford Ice Pavilion on Monday, March 5, advancing to the quarterfinals of the Division III CIAC State Tournament.

“It feels great to be back in the playoffs,” captain Casten Ernberg ’18 said. “We definitely had something to prove this year and I think it’s great that we were able to make it and make it in as the number one seed.”

The Wreckers got off to a hot start in the first period as Ryan Purgay’s ’18 solo run ended with a shot just wide, which was then followed by a key defensive play from Ernberg only a minute into the game. Although the Wreckers had the majority of the possession, they had a scare with seven minutes to go in the first period when Masuk’s Brock Butkovsky scored through goalkeeper Zack Bloom’s ’18 legs. Seventeen seconds later, Ernberg found the back of the net from distance to tie the score.

“We were not that phased at all at the end of the first period,” captain Sam New ’18 said regarding the scoreline. “We knew we had to come out and put it away in the second.”

Staples picked up where they left off at the start of the second period when Purgay scored twice in rapid succession to put the Wreckers up 3-1. Three minutes later, Zack Strober ’19 added the fourth goal for Staples.

“We knew that this game was one where we needed to go up early and by a lot to set the tone for the rest of the playoffs,” Cam Day ’18 said. “Once we got that comfortable lead it felt very rewarding but at the same time we all knew we still have work to do.”

The Panthers had everything to play for in the third period, and almost cut down the deficit when Kyle Cirillo struck the post five minutes in. Nevertheless, Staples remained dominant and added two more goals from Day and eventually Bidgood after he beat the entire Masuk defense and found the corner of the goal to top off a 6-1 victory.

I think the game went as planned for the most part,” Ernberg said. “We wanted to make sure that we were able to get a lot of pucks in the net and we got out without any severe injuries.”