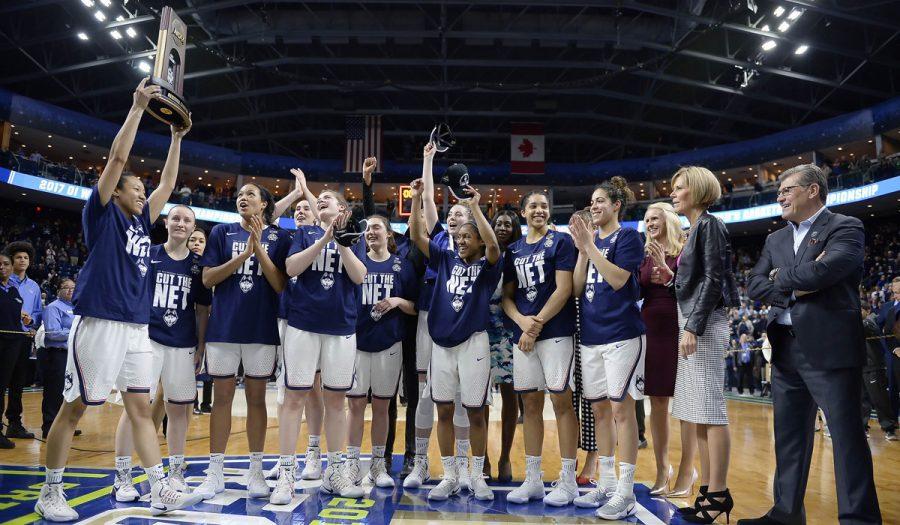 UCONN has been a powerhouse in NCAA women’s basketball for many years, and it seemed they would have another undefeated season this year. UCONN has won the March Madness tournament every year since 2013, and it looked like they have a strong chance at winning their fifth in a row this year, until they lost to Mississippi State Friday night. The last time they missed the Final Four was 2007, so their ticket to Dallas this year means that they have played in the last 10 Final Fours.

The university holds many NCAA women’s basketball records, including the most titles (11) and most consecutive wins (111). All of the titles won by UCONN have been since 1995, meaning that they have won half of the championship games since then. The win streak started after a loss to Stanford in November of 2014. The win streak ended Friday night after the overtime buzzer beater by Mississippi State’s Morgan William. Also, Coach Geno Auriemma recently won his 113th NCAA tournament game, which surpasses University of Tennessee’s old coach, Pat Summitt, for most tournament wins of all time.

“I think they can start another streak. They have a lot of good upperclassmen right now, and their underclassmen need to be more confident,” Olivia Troy ’17, a long time UCONN fan, said. This is the way that it works with college sports teams. The very talented upperclassmen have most of the playing time throughout their years, and then when they graduate, the younger, less experienced players have to step up and make a contribution. The UCONN underclassmen learn from the veterans, and improve to keep the success of the team going.

“It won’t have any negative impact. I think it would fuel them if anything and drive them to get there again. It’s the UCONN way to win,” Troy said about effect of the loss on the team’s future. In 2008 UCONN got knocked out in the Final Four, but then in the following two seasons, they won the championship. The same thing happened after they lost in the 2011 and 2012 Final Fours. They kept pushing and won four championships in a row.

The underclassmen have a great group of upperclassmen to learn from about the game, pressure, and not getting too arrogant with success. Even though UCONN lost in the Final Four this year, they still had a very impressive season. The younger players will learn from their troubles and improve them to have an even better season next year.
“What we do going forward will probably be more important than anything that they did this year,” Auriemma said in the post game conference, ending the season hopeful.