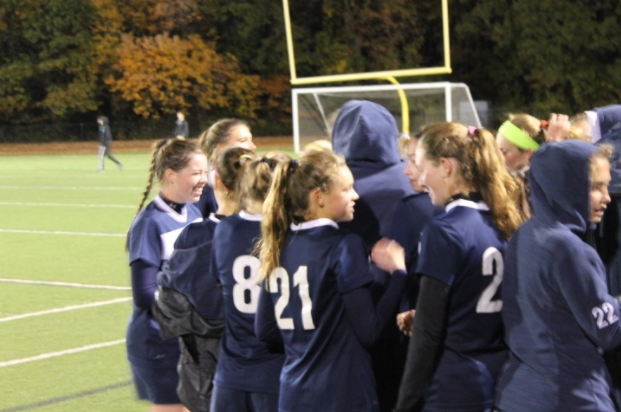 Wreckers players smile while maintaining a 1-0 lead at halftime.

The Wreckers and Mustangs close their seasons with a tie at third and eighth in the FCIAC standings, respectively.

Katie Ialeggio ’20 scored the first goal of the game, just seven minutes in, off an assist from Tia Zajec ’17. “I got a really good ball from Tia… Since they didn’t expect me to come in from the right side and it was a ball in the middle, I was able to beat [the defense],” Ialeggio said.

Following the goal however, the majority of the game was defined by defensive excellence. The Wreckers’ Morgan McWhirter ’17 and Sally McGee ’18, along with Olivia Ronca ’18 and Catherine Sprouls ’19, consistently prevented Warde from making an impact.

Kaitlyn Walsh of the Mustangs was able to break the tie with 25 minutes to go in the second half. The goal would be the only blemish in an otherwise spotless performance by goalie Anna Sivinski ’18, who executed a number of saves, including one high save with under six minutes to go in the game.

Despite the tie, Staples head coach Barry Beattie felt that the Wreckers outplayed Warde for the majority of the contest. “For 20 minutes, they were the better team, but for the other 60, I thought we were the better team. So I’m pleased,” Beattie said.

In finalizing their season at third in the FCIAC standings, the Wreckers are set to take on Darien High School on Friday, Oct. 28 at 3:30 p.m in the first round of conference playoffs.

“If we continue to keep the momentum of just going out there and wanting to win every game, I think that’ll keep us moving forward,” Captain Charlotte Rossi ’17 said.