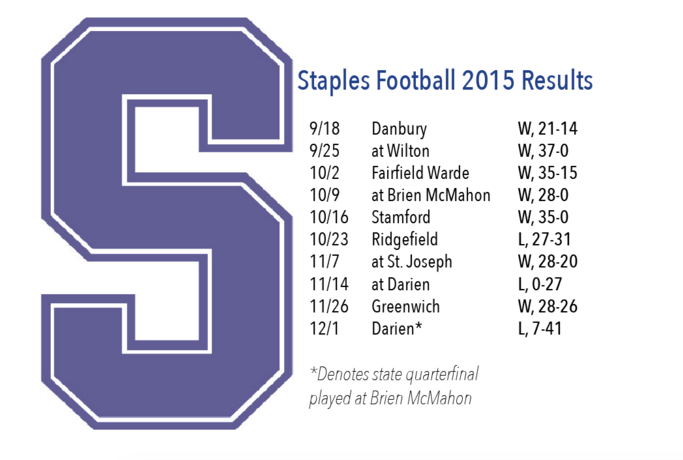 The Staples football season ended in a 41-7 loss to Darien in the state quarterfinals on Dec. 1, their second loss to the Blue Wave on the season. The Wreckers ended with a record of 7-3.

After starting the season 5-0, the team faltered to Ridgefield on Senior Night on Oct. 23. The team bounced back with a win over St. Joseph’s on Nov. 7.

Wide receiver and nickelback Julian Ross ’17 said the Nov. 7 win was his favorite game of the year.

“The sideline was unbelievable and the rollercoaster-like game was amazing,” Ross said. “It [gives me] the chills just thinking about it.”

However, the team struggled in their next game against FCIAC powerhouse Darien, falling 27-0. The Wreckers rebounded and won the final regular season game, beating Greenwich on Thanksgiving.

With the Thanksgiving win, Staples qualified for the quarterfinals as the seventh seed, and faced off against Darien, in a game in which they were eventually defeated.

Although the 2015 season ended in defeat, the Wreckers have reason to look forward to next year. Quarterback Andrew Speed ’17 and standout running back Ethan Burger ’17, both of whom were injured for much of the season, will only get healthier heading into 2016.

“[For next year], we need to get stronger,” Ross said. “We have so much returning talent. We just need guys like Burger and Speed to get healthy.”

For senior captain and linebacker Jack Griffin ’16, it was a bittersweet ending to a season, as he has now finished his Staples football career.

“I’m going to miss hanging out with all the guys everyday because they’re a great group of guys,” Griffin said.