Girls swim and dive splashes into the FCIAC elite 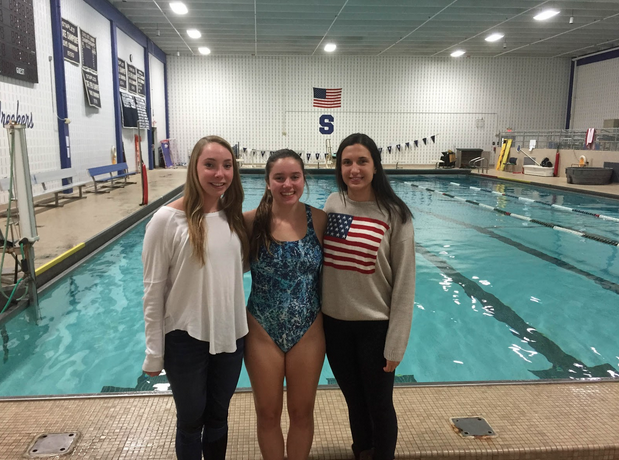 One year ago a talented stable of seniors shocked the state when they came in fourth place for CIACs. Lead by Malin Hovstadius ’15 and Jordan Santarella ’15, the Wreckers beat the likes of Wilton and Darien for first runners up in the conference.

One year later, the Wreckers plan on not only reaching their lofty expectations, but obliterating them with their hot start to the year. A 7-3 record may not seem dominant. Very good, but not dominant. After a comfortable win against Ridgefield, the Wreckers take position of first place in the FCIAC according to Ryan Lacey of Westport News. For years now, the league has been run by powerhouse Greenwich who Minahil Salam ’16 described as, “Almost a club team onto themselves.”

Salam, a senior, gave a ton of credit to the performance of her underclassmen this year, “It’s hard to pick one person who’s stood out this year the underclassmen as a whole have really stepped up.”

One of the underclassmen stepping up to the plate has been sophomore sensation Willow Woods ’18. Woods already has aspirations to move up onto the 100 breaststroke record board ealy into her Wrecker career.

Woods cites one big win as the best moment this year, “We defeated our rivals, Wilton, for the third time in 18 years. When all the girls were huddled together at the end of the meet and the announcer said that we had won, it was the most exciting win since last years second place at FCIACS.”

Woods breakout pick for this year was Kenzie Healy ’17, another seasoned upperclassmen leading this Wrecker team.

Healy recognizes how strong last year’s senior class was; however, she does believe that this year can be an even greater success, “For this season, I honestly think our main goal is to just improve even more than we did last season. We have the potential to.”

Healy, a sprinter, already has a spot on the top 10 board for the 100-freestyle.

This year is looking like it will go down in the books as one of the most successful in Wrecker history. In just the Ridgefield meet alone, five Staples records were broken. Highlighting the record setting day was Sophia Stanley ’16, who broke an 18-year-old record for individual diving when she scored 251.4.

Salam put it bluntly when she spoke of the team’s plans for this year, “Last year was great, but we have big plans for playoffs this year.”