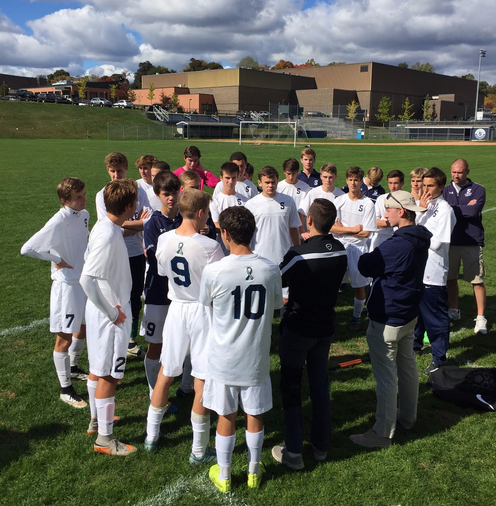 On Saturday, Oct. 17, the Wreckers boys soccer team was defeated by the Wilton High School Warriors 2-1 in an enthralling matchup on Loeffler Field.

The contest was highly anticipated given that the Warriors had beaten the Wreckers 1-0 last season. Staples was a solid 6-1-4 going into the game, third in the FCIAC West division, while Wilton was an impressive 7-3-2, fourth in the FCIAC East division.

Despite the game’s speed and intensity, neither team was able to find an offensive groove throughout the first half. Stalemate occurred and goals eluded both teams, including a hard shot by Aidan Wisher ’16 which was barely saved by the Warriors’ goalkeeper.

“In the first half we played very well,” Teddy Lawrence ’17, who plays left back, said. “We stuck to our game and played in on the ground.”

The stalemate was finally broken when Spencer Daniels ’17 scored on a rebound with just around 3:40 to go in the first half. The play occurred as a result of Matteo Broccolo ’17 stealing the ball deep in Wilton territory.

“Everyone was positive and this was probably the best game we’ve played all season,” Kenji Goto ’16, centerback and co-captain, said.

The Warriors, however, were undeterred; senior Harrison Allers scored with 36 minutes left in the second half to tie the game at one apiece.

Later on in the game, the Warriors were able to capitalize once again and seal the game. On a corner kick with under seven minutes to go in the game, Wilton’s Jack Brandt chipped an arching ball which went directly past the Wrecker defense and into the goal.

“When I saw the ball up in the air… I said, ‘I think that’s going into the back of the net,’ and sure enough, there it was, side netting,” Warrior head coach Jim Lewicki described.

The Wreckers are set to take on Fairfield Warde this Monday at 7 p.m. at Tetreau/Davis Field.