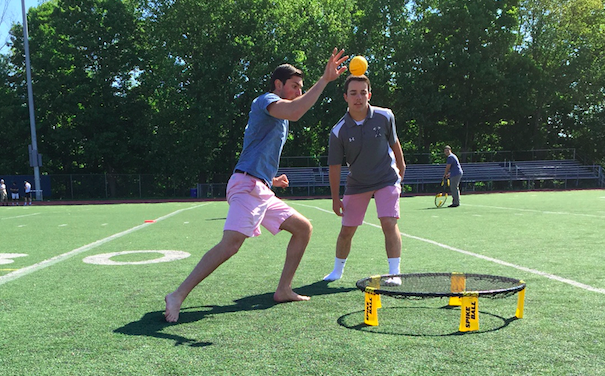 Ryan Angerthal '16 and John Dedomenico '16 enjoy a game of Spikeball during their gym period.

It is a craze that has taken the Staples student body by storm. Spikeball, which combines aspects of various sports including volleyball and tennis, is quickly becoming a backyard favorite amongst students, and has even found its way into gym classes.

While the game was invented in the late 1980’s, it never became the smash hit that it now is, and marketing efforts were dropped. Then, in 2008, a group of savvy investors led by Chris Ruder, a longtime fan of the game, decided to attempt to bring the game back into the spotlight.

Their efforts were a smashing success, and the game has become a favorite activity for Staples students and teachers alike.

Andrew Van Riper ’16 has been playing Spikeball intermittently for years, but has begun to play more seriously in recent months. He attributes the recent popularity of Spikeball to the originality of the game. “There’s really no sport like [Spikeball], its very unique,” Van Riper said.

In addition to its innovative concept, Spikeball has a very small learning curve, which makes it very easy for beginners to pick up the game. “Anybody can pick the game up and become really good at it in short period of time,” Van Riper said.

Jason Nelson ’16 is new to Spikeball, and heard about it for the first time last month. “I wanted to start playing because it just looked really fun,” Nelson said.

Gym teacher Maureen Cadden has recently implemented Spikeball into her gym classes, and believes that it is the perfect gym-class activity. “It is such a versatile game, you can play inside in the fieldhouse, or take take it outside to the turf,” Cadden said.