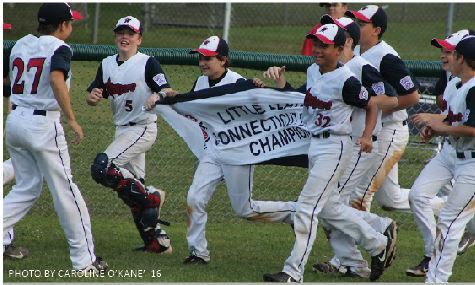 Many remember those little (or not so little) boys in evergreen baseball uniforms playing on TV during the Little League World Series two summers ago. It’s hard to believe they are now walking the halls of Staples and trying out for the high school team.

In August, 2013, the Westport Little League team, made up of 11 middle schoolers, represented New England in the LLWS. The boys became champions when they won against Rhode Island with a final score of 1-0 in the championship game.

“It seems like so long ago that I was watching the LLWS and ‘The Chad Knight’ with my friends,” Claudia Boland ’16 said. “It’s so weird that they’re in high school with us now.”

Little League has officially come to an end for these boys as a number of them will now be continuing their baseball careers in high school.

“We are expecting a great group of players who have had great coaching to continue the winning tradition here at Staples,” varsity player Phil McGovern ’15 said.

Thomas Whelan, who coached the New England Little League team in the LLWS, said that fundamentals such as running off the field at the end of an inning and always sprinting to first base are skills used from Little League all the way up to the Big Leagues.

“I think that all the boys associated with Westport Little League, not just the boys from the LLWS, that try out for the Staples baseball team will not have any issues with the transition to high school ball,” Whelan said “This is a by product of the hard work of the Westport Little League board that make sure all children have the ideal baseball experience from K to eigth grade.”

Matt Stone ’18, who was the catcher of the New England Little League team, will be playing his first year of Staples baseball starting this spring. He said the main differences he will be facing as a high school baseball player are faster pitching and stronger teammates and competitors.

On the other hand, Christopher Drbal ’18, who also played on the New England Little League team, said he feels that Staples baseball will be more serious than Little League baseball.

“In Little League it was more about having a blast with your friends,” Drbal said. “High school ball is more about working hard, competing, getting better, focusing on how to help the team and winning to build a reputation for yourself, your team and your school.”

Drbal and Stone agree that the competitive aspect of Little League baseball has given them experience that will prove as an advantage on the Staples diamond. Both players are excited for this upcoming season and to further their previous baseball skills.

“I’m excited to play for my town again this year for Staples,” Stone said.

Current varsity baseball captain Ian Burns ’15 expects big things out of these boys and thinks they are a talented group of players. He said he hasn’t gotten a chance to see them play since the LLWS but believes what they did is a great accomplishment.

“Hopefully they have the same success at the high-school level,” Burns said.