Bennewitz drives for success to close out her high-school career 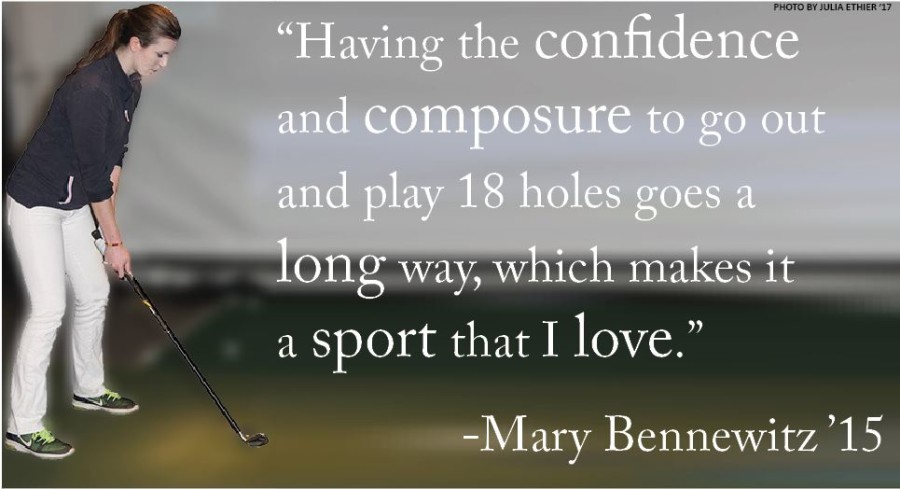 Mary Bennewitz ’15 might just be the perfect mix of Tiger Woods and Hope Solo with her mad soccer skills and fierce shots on the golf course.

As a successful soccer player and golfer, Bennewitz enjoys being a team player, as well as competing as an individual.

“Golf is one of the sports where it’s easy to compare your performance to another’s,” Bennewitz said. “And with the addition of having a ranked line-up for each match, there can potentially be a lot of competition between teammates.”

While this sport can be competitive among teammates, Bennewitz said it remains a team sport at Staples through the coaching.

“Whether it was our coach Robert Byiteck who retired last year or our new head coach Patty Kondub, the coaches make sure that there is a comfortable environment that will allow the players to not only grow individually but an environment that makes the players become teammates rather than opponents.”

Bennewitz began playing golf when she moved to Westport from the Netherlands. She had been taking lessons since the age of 7 but hadn’t played an actual round of golf until she was 10.

“I think what drew me to [golf] is how individualized it is. It’s a head game. You have to be mentally tough even before you start the match,” Bennewitz said. “Having the confidence and composure to go out and play 18 holes goes a long way, which makes it a sport that I love.”

Bennewitz currently works at The First Tee, a national program that has a chapter at the Fairchild Wheeler Golf Course where she used to take classes.

“The First Tee is not only able to teach its students the game of golf but also teaches them life values,” Bennewitz said. “That idea is what makes me continue to love the game and is one of the reasons why I’ve stuck with it for the last 11 years.”