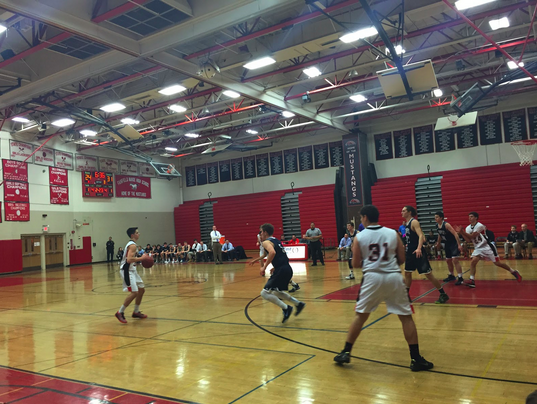 After winning three straight games to begin FCIAC play, including an upset victory over Stamford on Dec. 22, the Staples boys’ basketball team’s undefeated conference mark is no more. On Friday night, the team faltered in the final minutes of the fourth quarter, and lost at Fairfield Warde, 63-56.

Staples took a 27-22 lead into the half after a buzzer beating tip-in by Connor Whelan ’15, and built on the lead in the early stages of the third quarter, leading by as much as 10.

However, Warde would not go down easy.

The Mustangs used a 13-0 fourth quarter run, led by a steal and two buckets from point guard Chris Smaldone, to re-energize the hometown crowd and put Warde in the lead, 54-47.

“I think the pressure really got to us…we lacked confidence getting the ball up the court,” shooting guard Ben Casparius ’17 said.

A Whelan jumper from just outside the paint with 1:08 left in the fourth quarter would bring the Wreckers within two, but they would never regain a lead, as Fairfield Warde pulled away with the victory.

“It really comes down to free throw shooting, rebounding and taking care of the ball. [If] you win the turnover battle, you’re going to be right there…we didn’t do that tonight,” Staples head coach Colin DeVine said.

The loss puts Staples in second place in the FCIAC Central division with an overall record of 4-2 and a league record of 3-1.

Both teams will return to action next Tuesday, as Staples plays at Greenwich and Warde travels to Darien.