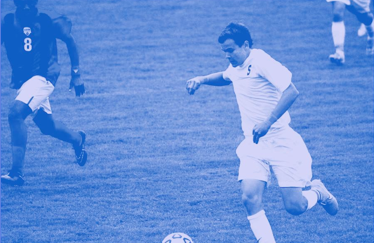 With an incredible 12 state championships and 27 FCIAC titles, the Staples boys’ varsity soccer team is one of the most storied programs in all of Connecticut. The current varsity squad refers to themselves as a family, but there are actually many players with Staples’ soccer alumni in their family trees.

“Growing up watching my brother play Staples soccer and win championships gave me a head start in understanding what Staples soccer was all about,” Graham Gudis ’16 said .Gudis is quick to point out that his brother’s three FCIAC titles from 2007 to 2010 don’t pressure him individually, but he is motivated to be part of championship teams just like his brother.

Graham’s older brother Greg Gudis ’11, a four-year varsity player and captain of the 2010 FCIAC champion team, said that both he and Graham were very competitive as kids. To this day, Greg said, they “both hate to lose, and both give everything 110 percent.”

Led by head coach Dan Woog, an immense contributor to the program since 1970, Staples soccer has been known for its strong tradition and commitment to excellence. Woog said that the younger brothers tend to come into ninth grade with a deeper knowledge of Staples soccer than his peers. As a coach, Woog does his best to ensure that he evaluates younger siblings as “different people, with different personalities, strengths and weaknesses,” and that he treats them as true individuals on the soccer field.

Goalie Brenden Price ’16 said he enjoyed sharing the pitch with his brother, forward Sterling Price ’14, because “it gave us a little friendly competition,” Sterling said. “Watching my brother play for Staples has been an incredible sight, and being on the same team last year was an enlightening experience.” Sterling believes that together, the duo of brothers is able to emulate the goals of the Staples soccer program by giving their best effort on the field and off.

Maggie Walsh ’15 and her sister Alli Walsh ’09 also have fond memories of each other on Loeffler Field. Alli said, “I could not be more proud of Maggie, everything she has accomplished and all that she has to look forward to in her soccer career.” Maggie said their family, which includes her brother and former Wrecker keeper Connor Walsh ’11, loves to reminisce as a group about past accomplishes.

Many of the siblings heaped praise upon each other, but Harry Birch ’13, a member of the 2010 FCIAC championship team, made sure to stay true to sibling rivalry by saying that his brother, Will Birch ’18, is “still not as good as me, but is a decent goalie.”