Filling the gap of seniors is more difficult than usual 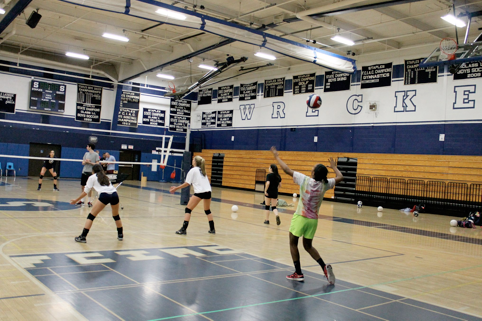 Shannon Cardoza ’15, a defensive specialist, serves the ball as her team practices in order to try and improve their third place standing in the FCIAC Central.

Last year, the Staples girls’ volleyball team was just short of unbeatable. With a solid senior class both in skills and in numbers, the team was almost undefeated.  But, just like every other season, the seniors graduate and teams are forced to reform their game plans to accommodate the new rosters. In losing such a strong senior class, the volleyball team has had to adjust more than usual.

In the 2013 season, the Greenwich Cardinals were the only team that managed to defeat the Wreckers-once in the regular season and again in the FCIAC final. The Wreckers were able to get revenge during the Class LL state semi-finals, where they defeated the Cardinals and went on to be runners-up in the State tournament where they lost to Cheshire.

Now, with a record of 5-7, the team is hoping their new seniors will be able to fill the gap left by last year’s graduating class. “Losing our seniors from last year has affected us a little bit as a program, because they were such amazing players. But this year’s seniors are ready and excited to get out there and maintain our program’s status,” varsity player Maya Lawande ’16 said.

While it is still fairly early in the season, the team hopes that they will not only be able to meet, but also exceed the expectations that Coach Jonathan Shepro said are “always very high for every team at Staples.”

The team is young this year. Although there are still 10 seniors, they didn’t get a lot of playing time last year. “This year’s team is very different.  Every game is a battle and we are getting contributions from everyone… I think this season is all about learning and gaining experience not just in how to play but in how to work together to achieve a goal,” Shepro said.

The team may not have as good of a record as last year’s, but Shepro is not focused on that. “This group of girls is really fantastic.  We are working hard and trying to get better.  I think we will continue to improve as the season goes on.”

Captain Kaela O’Kelly ’15 recognizes that the team has lost some valuable players, such as All-State hitter Amelia Brackett, talented setter Ariana Sherman, and several others. However, she sees a lot of strengths with the current players, “[We have] a very deep team where everyone can pretty much do everything. We hustle over every inch of the court and are able to communicate well,” O’Kelly said.

Whether the team achieves their goal of making and going as far as possible in both FCIACS and the State tournament this season, O’Kelly feels they are working their hardest and having fun. “All out, all game, all season is our motto. We’re having fun and doing what we love while striving to be the best we can be and help each other to be the best we can be. We love to play volleyball; the wins are just a bonus,” O’Kelly said.