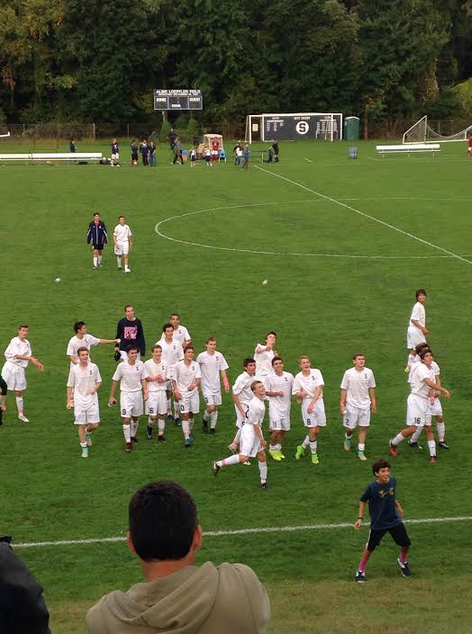 To show off their support for breast cancer, the members of the soccer team warmed up in their breast cancer awareness shirts, which was only one part of the “pink out.”

As their kick off time was quickly approaching, the awareness shirts were taken off to reveal flashy pink tape around their wrists as well their ankles.

The team began the first half with their traditional pep-talk, and the team seemed eager to win the game right from the start.

The half started off with Daniel Reid ’17 on a breakaway to goal. As players caught up to him however, he was forced to cross the ball to Daniel Perez Elorza ’16 whose shot landed just wide of the net.

Following the miss, Perez was tripped in the goalie box which led to a free kick. Graham Gudis ’16 was chosen to take the kick, but shot a straight liner right to the goalie’s hands.

With 24 minutes and 53 seconds left, Reid took off with another break away and headed straight to goal. As the goalie was approaching, Reid shot the ball towards the upper left hand of the net, making the shot.

“That was my first goal on varsity. It was ambitious but I figured it was worth a go, and I was happy that it worked,” Reid said.

A few minutes later, another Staples player was tripped in the goalie box. Gudis took the penalty once again, this time successfully hitting the ball to the lower left hand corner, scoring the second
goal of the game.

“It was exhilarating. It felt so good to get my first goal of the season under my belt. Hopefully this is the beginning of many more,” Gudis said.

With five minutes and six seconds remaining in the first half, Aiden Wisher ’16 took the ball towards the end line of the field. He then hit a hard ground cross straight towards Nate Argosh ’15. Argosh shot the ball right to the back of the net.

Staples, knowing they couldn’t let up, picked up the pace on the field to start the second half off strong.

Thirty Three minutes and two seconds into the second half, Argosh scored his second goal of the game, making the score be 4-0.

The Staples Wreckers held possession for the rest of the game.

Two shots were taken by Central High School, but Noah Schwaeber ’17 was able to make the necessary saves.

To celebrate the victory, the Staples team threw mini soccer balls to the crowd while running their post-game cool down.

“It was a great win for Staples boys’ soccer, and definitely an exciting game to watch,” Logan Murphy ’14 said.