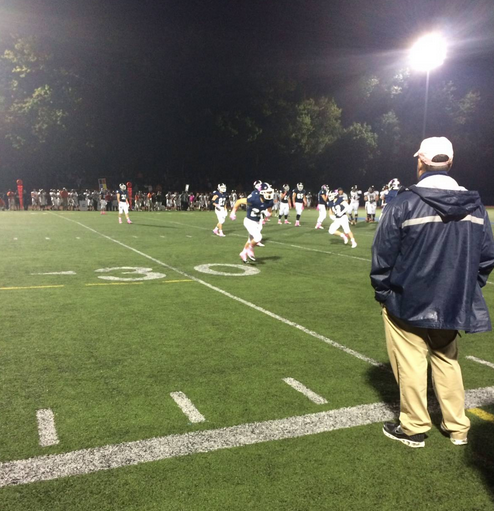 The Wrecker's offense runs the ball around the 30 yard line.

On a chilly Thursday night, Staples embarked on what would become one of the most suspenseful games to date.  In contrast to Staples 34-0 win over Westhill at last weeks homecoming, this game was a real battle until the very end. Though Staples fought hard the entire game, the final score was 37-34 Stamford.

As SuperFans decked out in pink, Staples top defense faced off against Stamford’s impressive offense, led by quarterback Jalen Brown ’15. After having only given up three points in the regular season so far, the Wreckers were ready to take on Stamford’s offense.

Though the black knights scored the first touchdown of the game, the Wreckers soon retaliated with a pass from quarterback Teddy Coogan ’15 to wide receiver Jake Melnick ’15 resulting in a 47-yard touchdown for Staples, bringing the score to 7-7.

Throughout the first quarter there was impressive play on both sides, including an interception by Staples Ryan Connors ’15.  By the end of the first quarter both teams had scored another touchdown and indicated that this was going to be a dynamic game.

However, the points didn’t stop there.  Stamford scored another touchdown with 4:54 to go in the first half.  However, the extra point was blocked by Jack Griffin ’16, holding the Black Knights to only 6 points and making the score 21-27 Stamford.

The Wreckers final drive in the first half was scattered with penalties and they punted off to Stamford.  Stamford ‘s final possession of the half ended with the kicking team running onto the field with 1 second to go.  The field goal was good, ending the half 21 Wreckers to 30 Knights.

The start of the second half seemed bleak for the Wreckers as the ball was fumbled then intercepted in their first two drives.  However, the Wreckers turned it around with a drive down the field ending in a 27-yard pass from Shearer to Melnick, making the score 28 Wreckers to 30 Stamford and putting the Wreckers within a field goal of winning the game with less than three minutes in the third quarter.

On Stamford’s next possession, Staples’ Colin Hoy ’16 intercepted Brown’s pass.  This turnover was soon converted into points on the board when Ethan Burger ’17 scored a 25-yard touchdown, making the score 34-30 Wreckers.  Staples tried for a 2-point-conversion but Shearer’s pass to Nick Esposito ’15 was incomplete so the score remained 34-30 Wreckers as the third quarter ended.

After a Knight’s touchdown with 7:40 left, the game ended in a scramble between the two teams.  Staples fumbled the ball, which was recovered by the Knights at the Wreckers 15 yard line with less than two minutes to go in the game.  Stamford then had a turnover of their own as Stamford fumbled at the Wreckers 4-yard line and the ball was recovered by Staples with only 39.9 seconds left in the game.  On the final “Hail Mary” pass of the game, Shearer’s pass was intercepted by Stamford as the clock ran down to 0.  The final score of the game is 37 Black Knights to 34 Wreckers.

In one of the toughest battles to date, the Wreckers showed their persistence as they fought into the last seconds.  Despite a disappointing loss, the Wreckers are ready to take on the rest of their season.

The Wreckers next game is against Ludlowe on Oct. 10 as they hope to come back with another win.