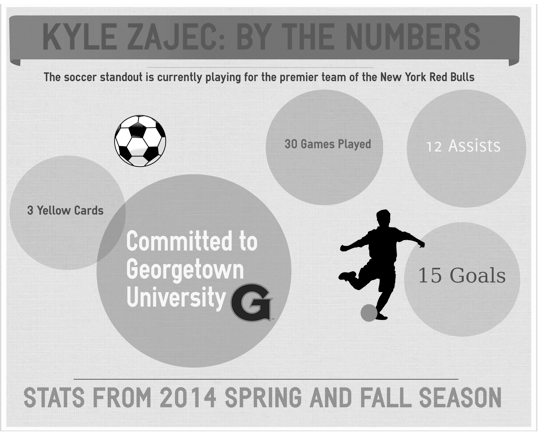 To reach the highest level of any professional sport is one of the hardest feats imaginable, an accomplishment that only a select group can boast. Kyle Zajec ’15 plans to not only join that elite group but make his mark in it.

Zajec started playing at age five, and at age nine he joined a competitive travel team. It did not take long for Zajec to woo his coaches with a skill set years beyond those of his teammates.

“From a young age you start to realize that you are in fact better than the others, and your idea is enhanced by the coaches when they play you more and favor you. I was specifically told that I was ‘special’ in u13 by my coach,” Zajec said.

Zajec decided to take his talents to the next level after travel became too easy.

“I started doing [New York] Red Bulls’ camps when I was about 10 years old. They recognized me there and invited me to try out for the academy when I was 13.” Zajec ultimately made the team, and developed with them throughout middle school.

Prior to stepping foot in Staples, Zajec had already built up quite a legacy.

Head soccer coach Dan Woog recalls some of what he heard, saying, “I knew he was a very good player. He was potentially the best player we had since Kyle Martino ’99 who went on to play for the national team.” Zajec was bound to dominate the FCIAC, but to the disappointment of many fans, his potential went untapped by the Wreckers.

The choice wasn’t easy. “I knew going into high school that rules prohibited me from playing both Staples and academy. I wanted to play for Staples and I still do, but I wouldn’t give up the Red Bulls for it,” Zajec said.

Woog was originally skeptical of Zajec’s choice to turn down the offer from Staples. “At the time I thought he could be missing out,” he said. Woog realizes now the benefits of Zajec’s choice.

“In retrospect I think Kyle made a very good choice for himself. He is clearly head and shoulders above anybody at Staples. I fully support what [he] decided” Woog said.

A major benefit Zajec has gained from playing at the Red Bull Academy has come in the form of attention from colleges. “I enjoyed the recruitment process. It’s nice to feel wanted by so many people. Of all the schools that reached out to me, my top four that I wanted to go to most were Georgetown, UVA, Duke and Wake Forest,” Zajec said.

In the Fall of his junior year Zajec decided to take his talents to Washington and play for coach Brian Wiese at Georgetown University. “First, they are a school with good academics and a soccer team that can compete for a national championship year in and year out. I connected with the players, coaches and the Georgetown area,” Zajec said of his choice.

Zajec’s hard work with the Red Bull organization has propelled him far. Currently he plays for the New York Red Bulls’ reserve team.

With the commitment Zajec has put towards playing professional soccer, he still manages to give back to the Westport soccer community. Woog raved about his support of the local soccer program saying, “He plays in our summer league. He’s been to a lot of our games. He has become friendly with a lot of the senior players. He’s a leader as far as mentoring younger players. He’s been as much a part of Staples soccer as anyone outside our program can be.”

In Zajec’s most recent homage to Staples Soccer he has decided to switch his number to 15, in honor of former Staples soccer star Preston Hirten who passed away at age 20.

For Zajec the best is yet to come.

“My ultimate goal for soccer is to become a professional and play in the World Cup,” he said.