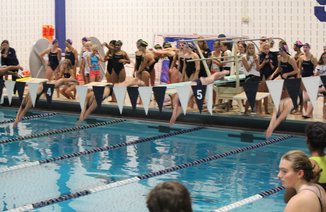 This past Friday at the Staples pool, the girls’ Swimming and Diving team faced New Canaan and Trumbull for their first meet of the season.

Going into the meet Captain Jordan Santarella said, “I felt really confident because this team has a lot of potential.”

Having come in sixth place at state opens last season the team returned with high hopes.

Without star swimmer Verity Abel, the team still managed to win most of the events. “We were really nervous how we would do without Verity,” Santarella said.

In the past four years having Abel in the pool has made it easy for the Wreckers to earn points in the 200 meter IM and all freestyle events.

Staples beat Trumbull by 48 points but, fell to New Canaan by 14 points. “The girls had done a fair amount of work and were psyched up and thats why we did so well,” Coach Mike Laux claims.

Kenzie Healy ’17 says, “It’s really exciting that a lot of girls made the record board and many are also very close. I think it will motivate the team to have that goal to work towards.”

For future meets, both Santarella and Laux agree that the new swimmers have a lot of potential and Laux says that the team can get better with hard practices and technique work.

Laux concluded by saying, “This is a very good team, if we work hard we can do very well by the end of the season.”