Gymnast Pamela Onorato, from tearing an ACL to tackling Nationals 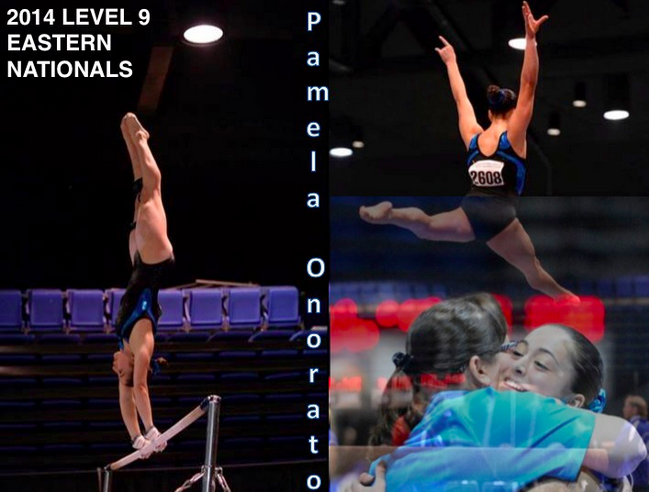 “Pam's bar routine was particularly exciting, as she maxed out each handstand, flirting with the edge of finding herself on the wrong side of the bar!” Coach Laurie DeFrancesco from Arena Gymnastics, said.

A year after tearing her ACL dismounting from beam, gymnast Pam Onorato ’15 is more than recovered. Onorato recently qualified for and attended the Level 9 Eastern National Championships for gymnastics earlier this month.

“The mental stamina it takes to stay focused on your goals during the months of rehabilitation, and to overcome the fear of using your leg again, is what ultimately led to Pam’s success this season,” Laurie DeFrancesco, Onorato’s coach of 10 years at Arena Gymnastics in Stamford, said.

“It felt really good to recover from my injury, because I was not only able to heal, but to improve my gymnastic abilities both mentally and physically in a year’s time,” Onorato added.

Level 9 is the second highest level of gymnastics before the Olympic level. In addition to the level being extremely challenging, the qualification process for Nationals is very selective. A gymnast must place in the top six in the all-around competition in her age group at Regionals.

Onorato took home the bronze medal, which qualified her for nationals.

However, as DeFrancesco explained, Nationals is not just a “participation” meet. Onorato went in with the goal to complete in each of her four routines without a fall.

DeFrancesco also knew before Onorato competed on beam that she would need to receive a 9.2 or higher out of 10 to medal. However, she chose not to share the information. “She was in her zone and I knew that alone would be her best chance,” DeFrancesco said.

Onorato ended up getting exactly a 9.2 on beam and placing fifth. She also finished in fifth place on bars and 13th place overall.

“Pam is successful in gymnastics because she is determined to be, and because she has an incredible work ethic.  Obviously, there needs to be a good amount of physical talent to be successful in any sport, but Pam’s positive attitude on even the most challenging of days, sets her apart from the majority of athletes that I have trained,” DeFrancesco concluded.