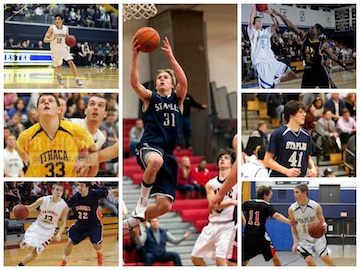 Every March, the whistle blows on another year of Wrecker basketball, and our seniors don the navy and white one last time. However, for the elite players, they hope to play in division III March Madness next year as freshmen in college.

In the second round of last year’s tournament, Ithaca College and the University of Rochester faced off to advance to the sweet 16.

The captains on both of the teams once played for Staples, representing Ithaca was Andrei Oztemel ’09 and for Rochester the division III player of the year John DiBartolomeo’09.

The Connecticut Post All State combo guard Peter Rankowitz’13 is at Washington University in Saint Louis. Over the summer, Rankowitz had reconstructive knee surgeries and has been inactive for his entire freshman year, but Staples’ coach Colin DeVine is positive that, “Peter will have a terrific collegiate career.”

The player to really watch this year is Luke Yeager ’10, a guard for the highest scoring offense in the country, Grinnell. Yeager’s statistics have been quite impressive so far this year, averaging 16 points a game on a very efficient 45 percent from the field.

Yeager was very confident about his team’s chances for making an impact, “Right now, we have three regular season games left. We’re currently the two seed in our conference so were setting ourselves up to make a nice run.”

The head coach of Grinnell, David Arseneault, said, “For the past three years, Luke has been a ‘wild-card’ for us. He tends to play very well in spurts. If he is ‘on’ we will max out his touches at the offensive end and let him carry his group.”

Coach Devine was filled with excitement for the upcoming tournament, “I watched it last year when John and Andre played, and if Luke and Peter make it this year, I will most definitely watch it again.”

This March, make sure to cheer on our Staples’ alumni as they try to lead their team to a division III championship.