Staples wrestling squares off against Danbury 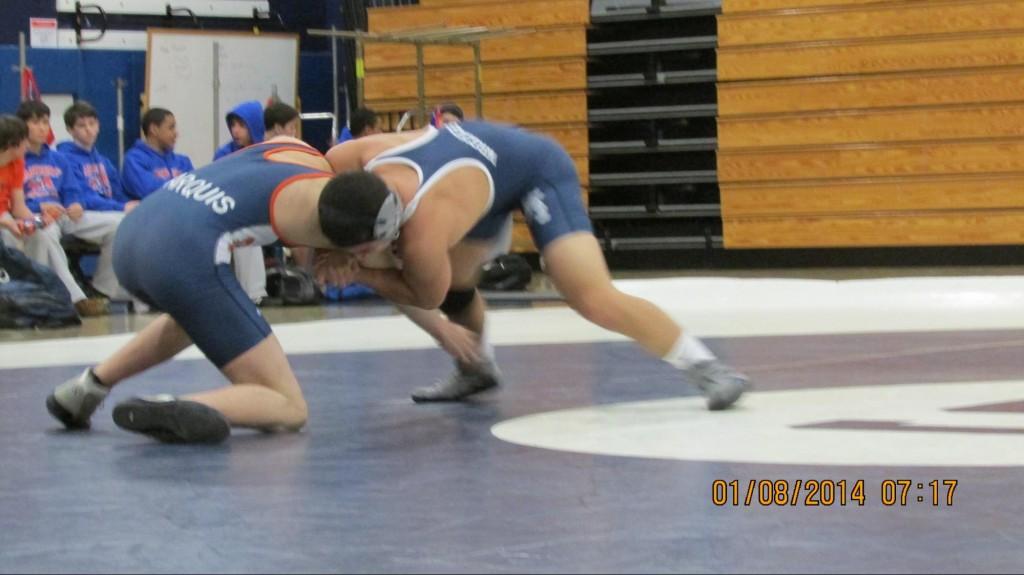 Justin Ludel ’14 wrestled Danbury head on and was able to end his match with a draw.

On Jan. 8, the Staples boys’ wrestling team squared off against the defending state champs, Danbury High School. The much anticipated match was set to go at 6:00 pm in the Staples basketball gym.

The Wreckers did not wreck Danbury, who won by a margin of 76-3 against Staples. However, Jonathan Maragos ’16, believes that this was indeed a learning experience. “It was a hard fought battle. It certainly was a tough loss but everyone fought, the scoreboard didn’t tell the story tonight.”

Co-Captain, Justin Ludel ’14, the only Wrecker to score in Wednesday’s dual meet, believes that everyone “wrestled with their heart on their sleeves.”

Maragos explained that the team has a lot of potential for the near future. “We are young with only two seniors, a stronger junior class, and a bigger sophomore class that has a long ways to go. But as a whole, a lot of our wrestlers are just getting back into the groove of things and working out the kinks.”

Co- Captain, Jake Santo ’14, believes that the team still has a lot of work ahead of them and for the rest of this season. “Danbury is one of the best programs in the state and has been for quite some time and they give us quite a benchmark to reach for. Meets like today can motivate people or destroy people and we need it to motivate us to push through to that next level.”

Danbury has won 26 of the previous 27 FCIAC championships, and traditionally Staples has been unable to defeat them.

The Wreckers are now 1-4 following the loss to Danbury. Their next meet is Jan. 11 at E.O. Smith.