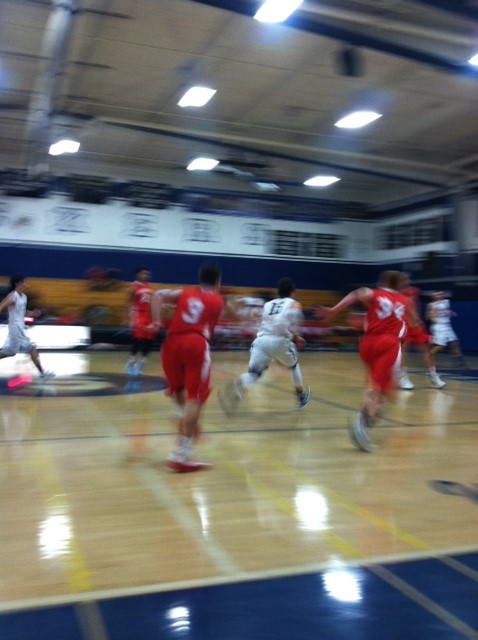 It was certainly a tight and jam packed game for the Staples boys’ basketball team on Tuesday night, at first.

Heads from the audience were bopping back and forth, left to right, following the high-speed action, and, there was a powerful aura of intensity in the gym.

Just in the first minute of the game, Staples scored a field goal.

Shortly after, Greenwich’s Colin Skiff got the Cardinals’ first rebound, the strategy that would mark the epitome of Greenwich’s victory.

“We knew they were a good rebounding team because they have a kid who is 6 foot 9,” Todd Goldstein ’14 said.

Jake Melnick’15 literally jumped over one of the tall Greenwich players at one point, almost making a shot.

The first quarter ended with a score of 16-15 Greenwich.

Even though Staples made a lot of three pointers, halftime concluded with a score of 35-20 Greenwich.

The Wreckers and the Cardinals had a lot of tenacity and fought with all of their might, which definitely caused many fouls on both ends.

“Greenwich is a very good team with good players who executed very well. We really fought hard throughout, which was a strength and we played very good defense for the most part. David Katz’14, Nick Esposito ’15, and Darryle Wiggins ’14 managed most of the scoring,” Goldstein said.

In the fourth quarter, Katz dove for several loose balls, determined to redeem possession of the ball.

“We have been a confident basketball team all year and we know when we run our stuff we are a very good team. But we let Greenwich dictate the pace and all assets of the game. This game was just another wake up call that nothing is given to you in this league and each night we have to go out and have maximum energy and effort,” the tri-captain Katz said.

The game ended with a Wreckers loss of 36-66. Luckily for the fans, their next game is this Friday, Jan. 10  at Wilton against the Warriors at 7:00 pm.

“Just thanks to all of the fans who come out to support us. We hope that you keep supporting us for the rest of the season,” Goldstein said.

The next home game is on Jan. 23 against Fairfield Ludlowe.