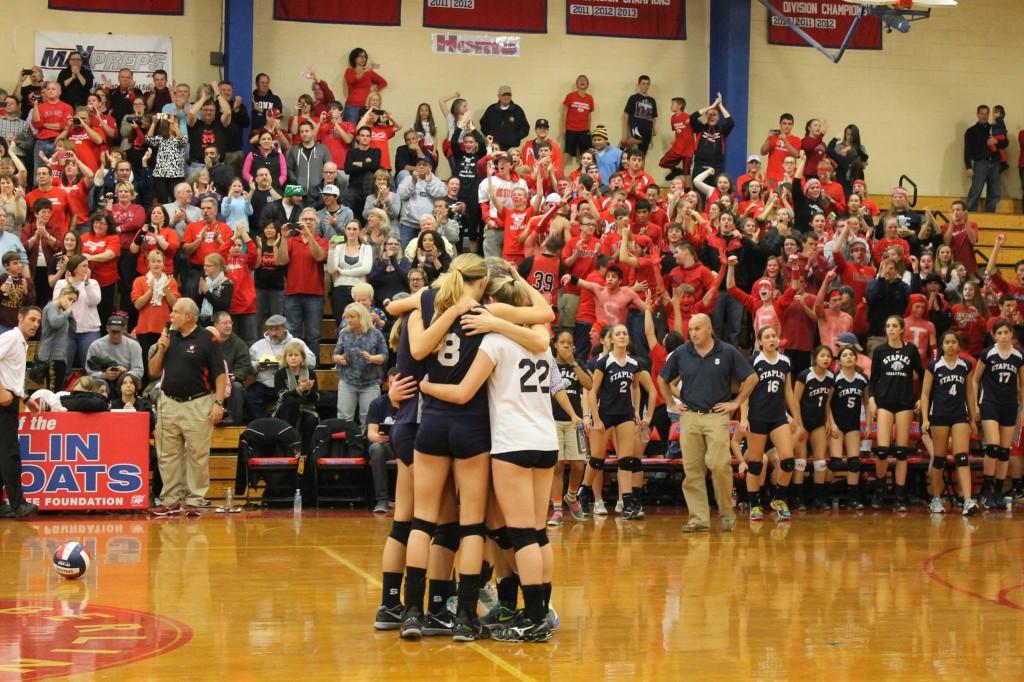 The girls huddle in after the final game point.

An unbelievable season from the girls’ volleyball team ended with a tough loss in Berlin on Saturday Nov. 15, when the Cheshire Rams defeated Staples in the state final, 3-1.

Staples played well, but the other team’s defense proved to be too strong. Crushing spikes from captains Lauren Mushro ’14 and Amelia Brackett ’14 were somehow dug again and again by the game’s MVP, Maria Buzzelli ’15.

The game started on a positive note for Staples. They took the first lead, going up 5-2 right off the bat. Cheshire caught up and went ahead by a few points. The Rams held their lead all the way to the 24th point, when Staples came back to score five straight point and take the set 26-24.

The Rams came back out with a vengeance in the second set, taking the first four points before Brackett rallied the team, scoring Staples’ first three points of the set. Cheshire got one in return before an ace by Arianna Sherman ’14 and a block by Knox Schieffelin ’14 tied things up. Then Cheshire started to pull away, first gaining a four point lead and then scoring enough unanswered points to win the set, 25-17.

The third set had had some truly amazing volleyball, with athletic defense and aggressive offense on both sides of the net. Cheshire won a key eighth point off one of the longest rallies yet; Buzzelli made some key plays as the Rams defended eight hits from the Wreckers.

It stayed close until 14-12 when Cheshire scored four straight points to gain a six point lead. Staples lost its grip a little bit, and the Rams pulled further ahead, taking the set 25-15.

Staples didn’t let two lost sets keep them from leaving it all on the court. The Wreckers took an early three-point lead, but Cheshire had all the momentum and it started to show about halfway through the set. The Rams went up 14-10, and then widened their lead to ten points. Despite a score of 23-13, Staples refused to give up, and closed in to make it 24-17. But Cheshire wasn’t going to allow any miraculous comebacks and finally finished the game 25-17, earning their sixth state title.

It was heartbreaking for the Staples’ squad, but at least they had their loyal fans to comfort them. The Wreckers may have lost, but their fans rushed the court anyway, cheering “we still love you,” and proving that Staples Superfans are in fact the best in the state.

Superfans won first in loyalty, but the Rams’ supporters came a close second. Cheshire students came dressed, and sometimes painted, in all red. A couple of their loudest boys sported red wigs and made enough noise to rival Staples. A group of Cheshire girls even performed a dance and cheer before the third set. Not to be outdone, Staples responded with some quick improvisation. A senior cheerleader who came to support her friends led the Staples section in a “rock steady” chant.

The Cheshire fans may have left the court chanting “undefeated,” but Staples fans and players had plenty of reasons to hold their heads high. It was Staples’ first appearance at the state championship since 1992, an impressive accomplishment given the talented teams they had to beat to get there.

Coach Jon Shepro said he was proud of his team and the way they played against some tough team competition.

“We got here and we had a great time, we just got beat by a good  team,” Shepro said.