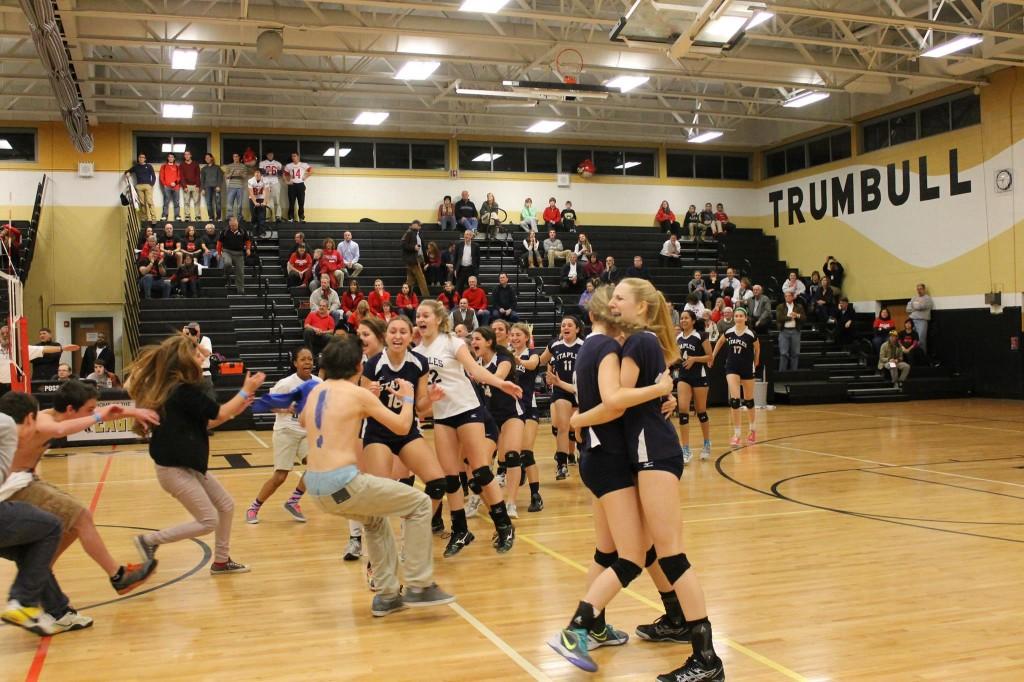 Despite orders from officials to stay in the bleachers, Staples fans rush the court to celebrate the victory.

Staples took some sweet revenge in the Trumbull gym on Thursday, Nov 15th, upsetting the Greenwich Cardinals and winning the state semifinal 3-1.

Greenwich beat Staples 3-2 in a heartbreaking FCIAC championship. The Lady Wreckers came to Trumbull undaunted and ready to take what was theirs.

“We wanted to fight to play tomorrow,” said captain Amelia Brackett ’14. “We didn’t want to give this season up.”

It was clear from the earliest points what kind of game this was going to be. The second rally was long, with crushing spikes and athletic digs on both sides of the net. Staples finally took the point, perhaps foreshadowing what was to come.

Greenwich made a couple of uncharacteristic mistakes in the first set, giving the Wreckers all the chance they needed. Staples won the first set 25-22, though it took four spikes before Greenwich finally relinquished the game point.

As strong as they were in the first, the girls struggled in the second set. They dropped an early lead to Greenwich, and the Cardinals capitalized, earning their first set 25-14.

With things tied up, the intense third set was close all the way through. The lead changed seven times as each team pushed for an advantage. It built to a 19-19 tie before two straight aces from no. 12 Dayna Gelman ’14 put the Wreckers ahead. The girls closed out the set with kills from Brackett and her fellow captain Lauren Mushro ’14.

It is possible that not a single true fan sat down during the whole fourth set. It started off as close as it ended, with neither team able to gain a lead through the first ten points. Staples hit their stride after a tip from Brackett put them up 11-10. They built on their momentum, at one point widening the gap to 18-13.

But Greenwich was not going down without a fight.

The Cardinals closed the gap to make it 22-21 Staples. Arianna Sherman ’14 set up Mushro for a kill to make it 23-21. Greenwich called a time out and Staples’ fans started the classic “I believe we will win” chant as players retook their spots on the court.

A Greenwich mishit sent the ball flying out of bounds, and suddenly it was game point for the Wreckers.

“It was amazing,” Brackett said. “It felt unreal.”

Staples fans ignored instructions to stay in the bleachers and rushed the court, crowding around the jubilant victors. Despite gridlock traffic on the route there and the fact that it was a Thursday night, Staples fans arrived in droves, including seven shirtless boys who creatively painted their chests and backs so they could support Val Kirsch ’14 and Dayna Gelman ’14 at the same time.

Few Greenwich students came, and there was only one challenger to the Superfans. A man with—in all seriousness—a rubber cardinal mask, crossed over from the Greenwich side and raised the mask as a kind of taunt. Veronica DeFelice ’14 started to chase him off before athletic director Marty Lisevick reigned her in.

The man with the rubber cardinal was eventually ordered back to the Trumbull side.

“What a nut,” muttered one observer.

Staples students will pit themselves against Cheshire fans on Saturday, Nov 15th, when the girls travel to Berlin to play the undefeated Cheshire  Rams in the state final.

“A team like this doesn’t come around very often,” said coach Jon Shepro. “We want to make sure we take advantage of the opportunity we have in front of us.”