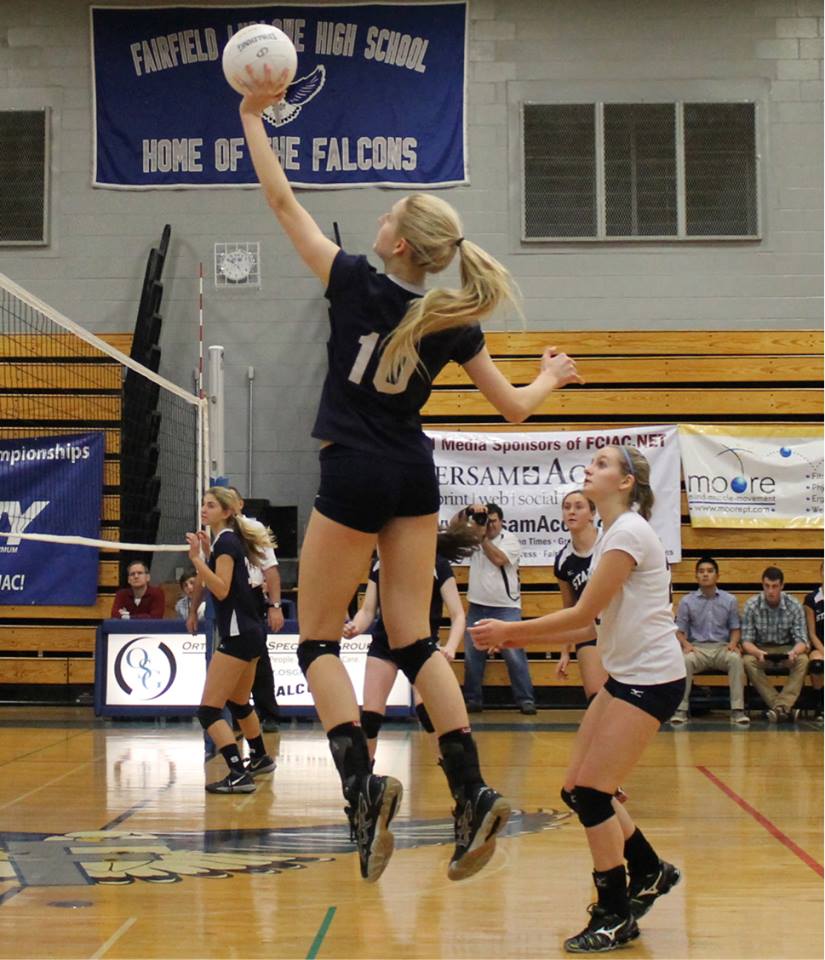 Staples girls’ volleyball put everything they had into the FCIAC final but the Greenwich Cardinals proved too strong; the match ended after Greenwich won the last of five riveting sets 15-5.

“More than what we did, is what Greenwich did,” Coach Jon Shepro said after the game.

The Cardinals played some excellent defense, coming up with all-out dives and one-handed bumps to keep points alive. In one rally, the Wreckers smashed four gorgeous spikes over the net, only to have each one of them dug and returned.

With long rallies like that one, every set was a battle. Greenwich made Staples earn everything, rarely giving up points with careless errors.

Even against very talented opponents, Staples made it a close game. The first set was rough with the Wreckers unable to recover after allowing Greenwich an early lead; the Cardinals took that game 25-14.

But Staples regained their footing and played strong in the second set. They won the first three points outright and eventually came out on top, 25-17, when Amelia Brackett ’14 tipped the ball past Greenwich defenders.

The third set was tight; Staples took an early lead but Greenwich eventually tied things up 16-16. The Cardinals played some brilliant defense to steal points from the Wreckers and win the game 25-20.

The fourth set was the one that had people literally jumping into the air in excitement. It was close all the way through, the lead trading back and forth every couple of points. Lauren Mushro ’14, Knox Schieffelin ’14, and Brackett led Staples to a 24-24 tie; the girls then fought hard for two more points to win the set 26-24.

Those emotional final points took a toll on Staples’ players. They dropped the first three points of the fifth set. From then on, Greenwich defense was near perfect; despite some excellent Staples’ play, they could not close the gap.

“We lost a lot of energy in the fourth…[it was] tough to go back out and play the fifth,” Shepro said.

The match ended with a kill from the MVP of the game, Greenwich’s Mirei Kato ’15, one of the many well-placed spikes she hit during the game.

A couple of Wreckers left the court in tears, but they had a “Let’s go Staples” chant from loyal fans to help keep their heads up.

The girls had the fans’ support all game. As per their usual standards, Staples supporters were loud enough that not only a Greenwich parent, but also a referee felt the need to walk over to the student section and voice a complaint.

Unsurprisingly, their objections had little effect.

To be fair, Greenwich fans made some noise too. According to the FCIAC announcer, the match attracted a record number of attendees. By the third set the gym’s volume had gone from loud to deafening. By the fourth, it had become a not-so-friendly competition with each section imitating the other’s cheers.

There was plenty to cheer about in a great match between two highly talented teams. Shepro said the final showed how the level of girls’ volleyball is picking up in Connecticut. He would like to see an equally competitive rematch in states.

“Greenwich was the better team tonight. I hope we get another chance at them,” Shepro said.