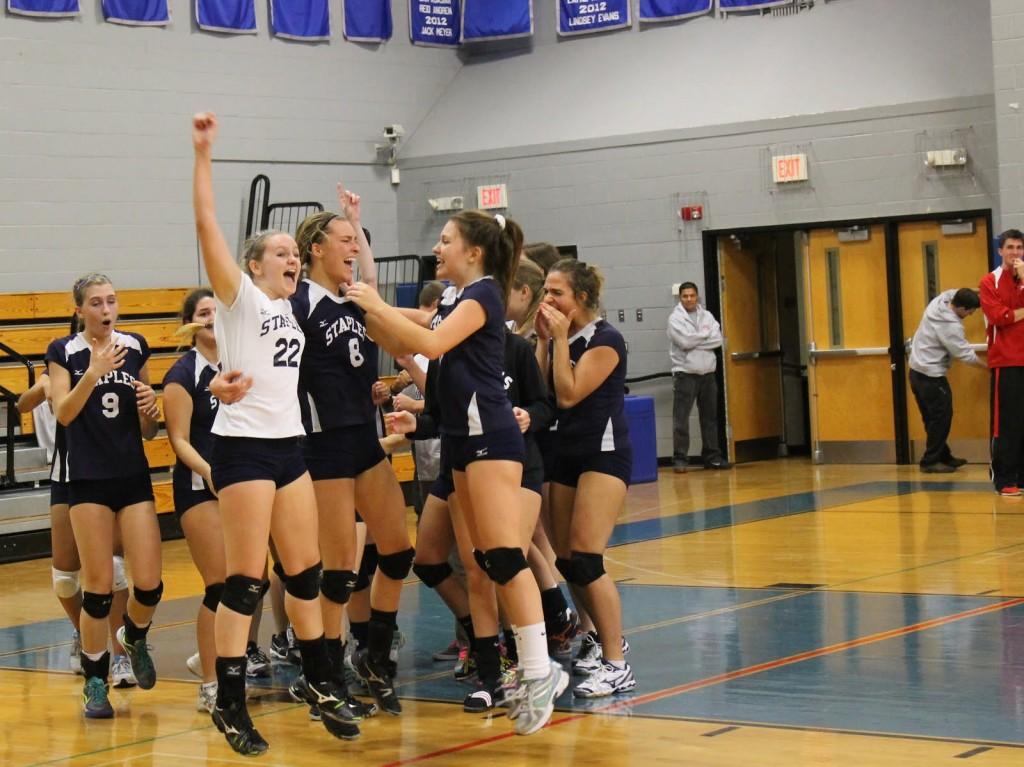 With a full crew of Superfans and total determination, the Staples girls’ volleyball team walked into Fairfield Ludlowe gym on Oct 30th and ripped a semifinal victory from the tight grasp of 22-time FCIAC champion Darien Blue Wave.

The match ended as dramatically as possible: Darien came from behind to tie things up at 24-24. Only after playing four game points did Staples finally triumph, 29-27.

It was a finale to fit a match of long rallies and high pressure; simple mistakes showed the toll stress took on players. Captain Lauren Mushro ‘14 explained Staples had gone in prepared for a tough game.

“We practiced the way they play. We knew this wasn’t going to be easy,” Mushro said.

The girls had to hold on to this focus through a one-hour delay as it took Greenwich five sets to beat Ludlowe in the earlier semifinal.

Finally hitting the court at 8 p.m., the teams spent the early minutes of the first set trading the lead back and forth. With strong play by Knox Schieffelin ‘14, Amelia Bracket ’14, and Mushro, Staples eventually pulled ahead by six-points. But this was Darien after all, that lead was cut to three points before the Wreckers finally claimed the set 25-21.

The second set wasn’t much different. Staples took an early lead, but Darien soon closed in, and the teams remained in a near-constant tie all the way to the twentieth point. Then Mushro hit two kills, Staples toughed out two long rallies, and Darien rocketed the ball out of bounds.

Suddenly, the Wreckers were up two sets to none against one of the best teams in FCIAC history. From 1993-2012, Blue Wave lost only 13 of 488 games and claimed 16 state titles in addition to the 22 FCIAC championships.

A sweep would have been a bit too much against this kind of talent, so the third set had to go to Darien. Staples went down 14-20, and the distance was too much to make up. Darien won the set 25-21.

The pressure built around the fourth set. Darien knew defeat would mean the end. Staples knew a loss would give its opponents dangerous momentum.

After dropping the first three points, Staples pulled things together. It was the same story of small short-lived leads until the Wreckers fought their way to a tantalizing 24-18.

That was when Darien turned into a wall.

Staples lost six straight points, and suddenly it was tied up 24-24. In volleyball, a team has to win by two points. On this court, no one was willing to let that happen.

After playing a total of 55 points, maybe it’s no surprise the game ended with a simple mistake. A Darien player misjudged a hit and sent the ball flying into the net to end the dramatic semifinal 29-27.

The victory brought the sizeable Staples’ section to their feet and rushing onto the court where they mobbed the jubilant team. These Superfans were successful in their own right: they managed to be louder than the rest of the stands combined and irritate a good number of Darien parents.

“This is horrible,” one parent was heard to say about the boisterous cheering.

Someone should probably warn the Greenwich parents, because these guys will be back in force on Saturday, Nov 2nd to cheer the girls on against Greenwich in the FCIAC final.

Coach Shepro commented on what that game means to his team.

“You don’t get these chances very often…We have a good chance [and] we’re looking forward to competing for an FCIAC title,” said Shepro.