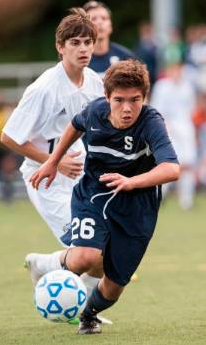 Kenji Goto ’16 may not be the tallest kid out on the soccer field and he may not be the quickest. But toughness is something that Goto has never lacked.

He is the strongest defender in the FCIAC and one that his opponents should be frightened of. Staples head soccer coach Dan Woog described Kenji Goto ’16 as a, “very tough defender who is very poised.”

This season, Goto tried out and successfully made the varsity team. He didn’t believe that he had much chance of getting into the games and receiving playing time.

However, with injuries devastating the Wreckers on Sept. 21st against St.Joseph, Woog made the decision to put in Goto, which certainly proved to be very beneficial for the team.

Goto played the entire game in the 2-1 victory over the Cadets and from there, he never looked back. After the game Woog said in his annual game reports on Staplessoccer.com, “Goto’s start brought to mind Nicky Hoberman in 2005. The junior played his first varsity game against Greenwich as a starter. He won the spot, and never relinquished it.”

Goto had proved that he meant business and has maintained his status as the starting defender ever since.

He believes that his success is due to the pressure that has been put upon him due to his teammates injuries.

“I think I’m doing pretty good so far and only hope to do better. Since so many players have been injured, I have been forced to improve every game and every practice. I have been playing more consistently than ever right now,” Goto said.

Goto’s teammates can feel the positive energy and effort that he brings onto the field each and every day. Co-Captain, Diego Alanis ’14, said, “He is a very good player. He is always attentive and supportive on and off the field. I love to play with him because he plays to feet. He’s stepped up huge for us this season.”.

Kenji Goto ’16 has brought a vibrant spark of intensity and toughness that the Wreckers need in order for them to be contenders for the state championship. Although Goto may not be the biggest kid out on the playing field, he plays with the most heart and gives a hundred percent on every play. He runs through the ball and never shies away from going into a 50-50 ball.

“Goto has added a spark to the team. The coaches are unable to take him out of the game because of what he brings to the team. His intensity and maximum effort is what makes him so special,” co-captain Jack Scott ’14, said.

Goto is a perfect example of how hard work pays off. Practicing everyday in the scorching sun of the summer has proved to be successful for Goto and he has lead the Wreckers to a record of 8-3-2. Watch Goto and the rest of Staples boys’ soccer this Saturday, Oct. 17th against Fairfield Warde.