Staples triumphs for the Pink-Out 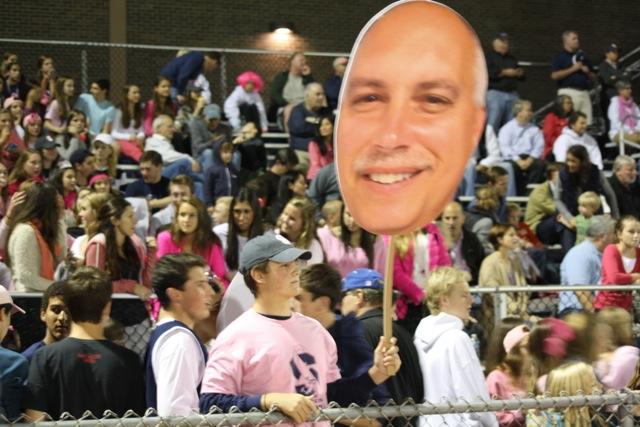 Captain Will Johnson ’14 wove his way through defenders from Fairfield Ludlowe, breaking tackles left and right, fought his way into open field, and scored a 70-yard punt return four minutes into the second half. This put Staples up 24-16 and opened the floodgates to a 35-point second half for the Wreckers.

The first half was much slower, with 17 points coming off of touchdowns from Jack Greenwald ’14 and Patrick Lesch ’14, as well as a 36-yard field goal from Mike Gifford ’14.

Staples did struggle a bit in the first half, with the defense allowing Ludlowe’s quarterback to run for a score, and Jack Massie ’14 throwing into an interception that was returned for a touchdown.

Coach Marce Petroccio said that at halftime, he didn’t have to say a word. Greenwald took control, and Petroccio summarized the speech after the game.

“He was very upset with the way everybody was playing, and he let them know that,” Petroccio said.

Greenwald’s message was certainly received by the team, as shown by their incredible 35-7 run in the second half.

The Pink-Out was just as successful as the game itself, with over $12,000 dollars having been raised by halftime. The pink-clad crowd showed support for the team and the cause.

Although Petroccio said that he hasn’t had anyone in his immediate or extended family with breast cancer, the Pink-Out still touched him.

“For a community to come out and support Pink Day and have a great crowd on a night like this, it says a lot about Westport,” Petroccio said.