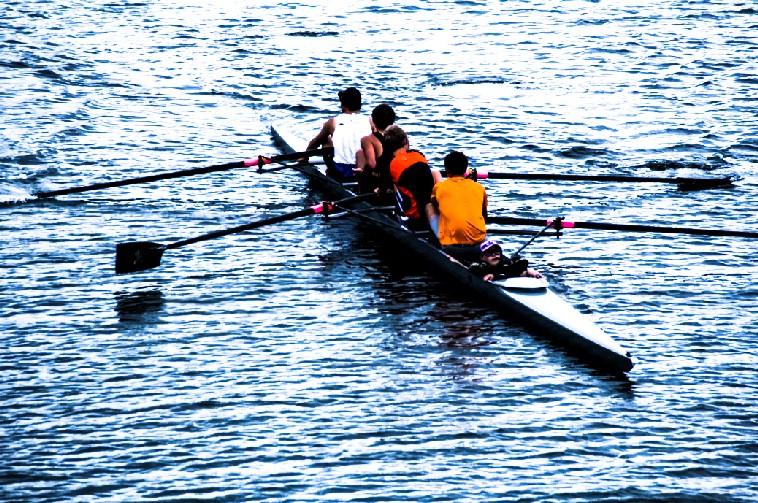 The sun is shining down and the water flows along with the current of the rowboat. Being a sport that requires technique, teamwork and a whole lot of effort, rowing seems to attract a population of Staples students who, despite rowing’s grueling workouts and tiring workouts, can’t get enough of being out there on water.

“Rowing is a sport that tests both your physical and mental boundaries,” Alison Morrison ’15 said. “If you put in the hours on land, it will show on the water and during the races.”

According to Morrison, practice is from 3:00-6:00 every day, and during the fall and spring competition seasons, races occur almost every weekend.

“A typical practice workout is around an hour to an hour and a half on the water either doing timed pieces or technique work. Races are either 2 or 6 kilometers depending on the season and [last]…. well, as fast as you can go” Morrison said.

James Banbury ’16 distinguishes rowing from other sports because it constantly requires movement and effort and it hurts like hell,” Banbury ’16 said.

According to Sammie Kurtz ’15, the girls rowing team stays in shape by running two loops that vary from 1.5 miles to 3.5 miles, taking part in yoga, biking, and performing erg tests, which are infamous among rowers.

Erg tests are practices on ergs (rowing machines) that track the rowing speed and distance the athlete rows. The tests focus on mental toughness, endurance, power and, overall, how much pain can be handled.

“If you talk to any rower, you will know they are extremely painful,” Kurtz said. “Basically, when you test, it feels like you are in living hell and you’re going to die and everything. Your mind and body just hurts.”

But somehow, rowers find the pain bearable and the workouts maintainable. “Often it’s said that rowers only talk about rowing, and I believe there is a reason for this,” Julia Schorr ’16 said. “It’s because the sport has impacted everyone who does it to the point where you don’t know what else to talk about.”

Schorr was so inspired that she took her love for rowing and entered the “Row to Rio” contest, where she and other artists submitted designs for the logo that will be the official symbol of U.S Rowing during the 2016 Rio de Janiero summer Olympics. Julia’s father saw an advertisement for the contest and encouraged her to create a logo since she had just started her Design and Tech class at school. Her father thought this would be a good chance for her to use her newfound skills.

“I have always loved art and graphic design, so when my father said it was for rowing in the 2016 Olympics, I thought it would be the perfect opportunity to merge my two passions,” Schorr said.

Her logo was chosen by the US Rowing Selection committee as a finalist and she campaigned hard and well to get online votes. Schorr ended up having the lead by the end of the online voting. Although the selection committee ultimately announced University of Cincinnati rower Jake Mercuci as the final winner, Julia’s logo was in the top 5 and will be used for events leading up to the games.

Schorr said, “I was disappointed, but at the same time proud that I was able to compete in a contest which had many entries from professional graphic designers.”

Schorr was pleased but not surprised by the support she recieved since showing suppor to teammates is such a part of Rowing culture.

“You learn how to be a good teammate. You make friends” Schorr said. “[Rowing] allows me to spend my time doing something that I truly love with teammates who are incredibly supportive.”

Despite the demanding exercise and back-breaking commitment, rowing continues to keep its crew breezing through the river in boats.

“Most people who row are completely in love with it. There is no way you could do such a physically, mentally and emotionally draining sport without loving it,” Morrison said.