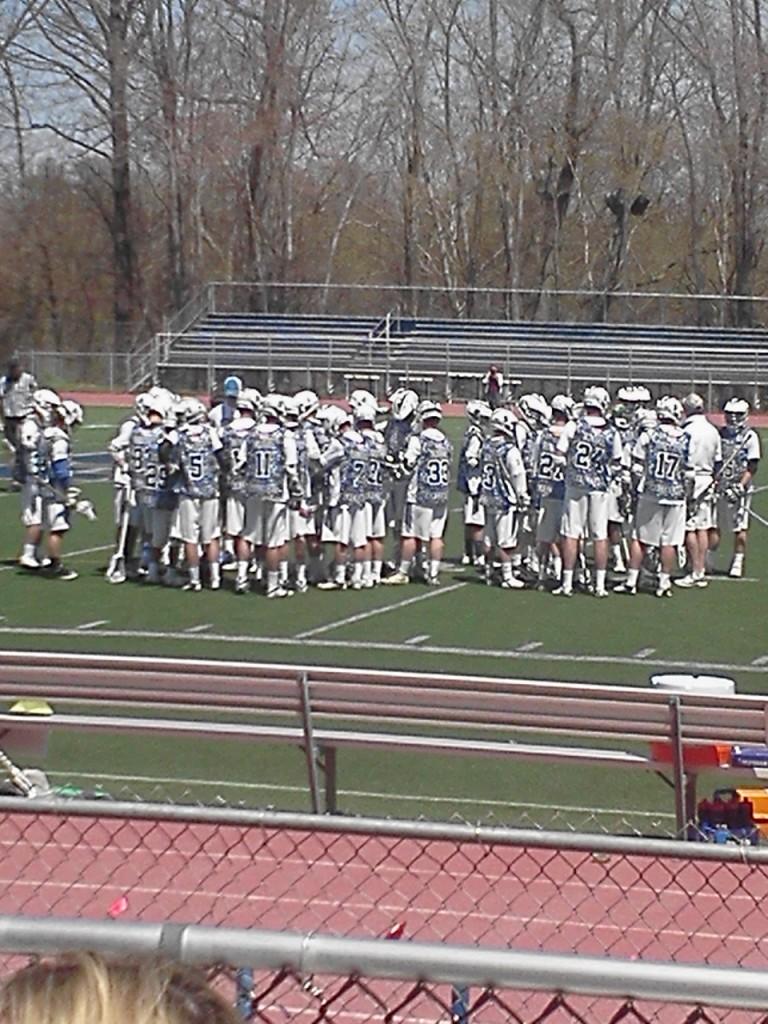 Staples needed a fourth quarter spark, and after huddling up here at the start of the period, they got just that.

Staples looked like they were playing as well as any lacrosse team in the FCIAC after the third quarter against Darien, when they were leading 3-1. Coming off a huge double overtime upset win against New Canaan, the team was preparing to knock off the  perennial powerhouse Blue Wave in a similar upset fashion.

But then they surrendered four unanswered goals in the fourth to fall 5-3.

Their loss is why it was so crucial for them to bounce back and get a win against St. Joseph’s. They did just that, winning by a final score of 9-5.

With the win, the Wreckers moved into conference playoff positioning, surging ahead of both Stamford and Fairfield Warde by a half game in the FCIAC standings. Staples currently holds the sixth seed, needing to finish in the top eight to make the tournament.

In the St. Joe’s game, captain and attackman Joey Zelkowitz ’13 led the way with three goals, all coming in the first half. Colin Bannon ’13 and Michael Reale ’16, who took advantage of increased playing time due to captain Jared Levi ’13’s concussion, each netted two, while middy Pete Bashar scored a pair in the loss for the Cadets.

“After taking a tough loss to Darien, we knew we had to come and bounce back, and we did just that,” said attackman Jon Pacilio ’14, who assisted Zelkowitz’s final goal, just before halftime. “This was a big game for us in terms of post season rankings, and we went in there knowing that and just took care of business.”

Before the start of the game, there was a roughly 30 minute ceremony, as Saturday’s game collected donations to the organization Sticks for Soldiers, a Fairfield-based group that raises money for wounded troops.

The highlight of the pregame was the announcement that Governor Dannel Malloy had officially declared that April 27was Roger Muchnick Jr. Day in Connecticut. Muchnick ’08 was a lacrosse captain for Staples in 2008, and lost his life earlier this year during Marines training, following two tours in Afghanistan. His No. 2 jersey was officially retired by Staples.

The next game for the Wreckers is today, away against Westhill in Stamford.

“Our expectations for the rest of the season are to win out,” Goalie Cole Gendels ’14 said, who had seven saves on the day. “But we need to take it one game at a time, starting with Westhill.”