Girls Basketball Team Suffers Loss, Out of States for First Time in 28 Years 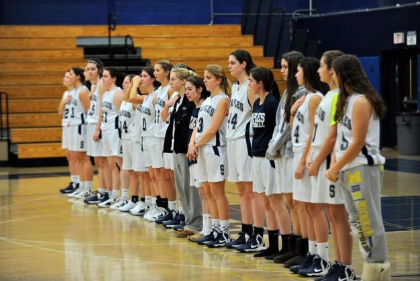 The Staples Girls Varsity Basketball team lost their last game to the Trumbull Eagles, bringing their season to a halt with a final score of 41-27; the team found themselves out of States for the first time in 28 years after losing their eighth game that would have qualified them to participate in the competition.

Many players, such as Abby Lustig ’15, expressed disappointment over the team’s loss. She said, “I think the problem that we had this season was not starting off well. There were a bunch of games early on in the season that we weren’t able to pull through those earlier games were really what hurt us in the end. Our seniors were such amazing leaders and players, though, that they were able to bring the team together and motivate everyone to leave everything out on the court each game.”

Ruby Steinberg ’14 looked back on the positives of the season as well. “Of course everyone is very disappointed that we didn’t make it to FCIACs this year, but I think it’s most important to recognize the fact that the team tried as hard as we could and that we still had an amazing season overall. That includes both the basketball aspect and the social aspect. We all grew so close this year and had so much fun.”

When commenting on the season, Coach Ed Huydic pointed out the difficulties that the team faced. He said, “This season certainly cannot be looked at in a negative light or as a failure because it was a team that had some real challenges to begin with; heavy graduation losses from a year ago put us in a position where it was really a transition year.” Despite the obstacles the team faced, they managed to maintain a 7-12 record up to the recent loss against Trumbull.

However, Huydic was quick to point out that, “Though we didn’t make the minimum number of victories – we came up one game short – I can’t say enough about the energy and the effort that the girls this year displayed in making an effort to attain that goal.”

Alli April ’13 reflected on her last season with the team positively. She said, “I feel that the team this year did really well with the factors we had to work with. We lost some good players last year and in the beginning of the season we were trying to figure out how to play as a team. I feel that we did the best we could and if more calls had been in our favor the outcome could have been different.”

The team is already anticipating a successful next season, though, and has been attending practices after school even though their season is over. Huydic is already looking towards a season full of hard work and wins. He said, “[the] senior class next year realizes [that in order] to get back to where the program has been all these years, the hard work is going to have to be doubled.”

Lustig agrees, saying, “While the loss stinks, it will only serve as motivation to get right back into the competition next year.”