Any Given Game Day 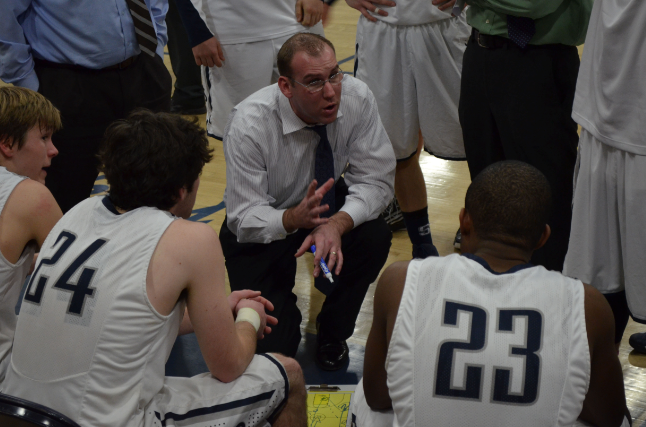 “We’re in hell right now gentlemen, believe me, and we can stay here get the **** kicked out of us or we can fight our way back to the light we can climb outta hell… one inch at a time.”

Even sitting on your couch at home watching “Any Given Sunday,” you can feel the intensity building when you hear Al Pacino start his inspirational halftime speech.

Imagine that couch you’re sitting on is a wooden bench, and your living room is the locker room. You’re weighed down with heavy padding and helmets and sweat drenches your jersey. Your team mates are packed in around you, and the center of everyone’s attention? Your coach.

This is the cliché in almost every Hollywood sports film, but is it a reality for the Wreckers?

Each coach is unique in how they get their team ready to perform, but whether it’s one of those inspirational speeches, or funny anecdote, all of them succeed in inspiring the players.

Wreckers football coach, Marce Petroccio’s, better known as Petroccio, could compare his speeches to the one given by Tony D’Amato in Any Given Sunday.

With regard to the intense pre-game words that pump up his players,  “I don’t write them down, I don’t practice them,” said Petroccio, “It’s just something that kinda comes to me.”

The players appreciate his pregame pep talks. Wreckers football player Nick Ward ’14 speaks highly of his coach. “The speeches mean a lot. He’s trying to motivate us as much as possible,” said Ward. “He really knows what he’s talking about.”

Ward recalls a specific game against St. Joseph’s where a half time pep talk really energized the players and helped them turn the game around. “Coach P. got us all pumped up and really changed the game.”

Emotions have run so high that Petroccio and the players alike can be caught shedding tears.

“I’ll tell you right now I cried when we lost to Norwich Academy,” said Petroccio, “but it’s all about life lessons and trying to prepare these guys to go out in the world, and every time something goes wrong they don’t totally fall apart, they know how to handle stressful situations.”

It seems that the speech gene comes naturally to most coaches. Greg Salamone ’13, player on the baseball team says Coach McFarland’s talks to empower his team. Salamone say’s that his coach is so experienced and wise that the speeches flow naturally, and come to him spontaneously. Salamone says his coach knows exactly what needs to be said in any given moment to motivate them to win the game. “From an outsider’s perspective, it may seem like he’s just screaming at us or criticizing us, but we all know his true motives, and this is why we are always confident before big games.”

Wreckers boys’ basketball coach, Colin Devine also works hard to get his players in the zone. Twelve minutes before game time he says a few words making sure the players understand what they have to do to win the game.

Abby Lustig ’15, on the girls ‘JV basketball team said that sometimes Coach Huydic leaves it up to the team captains to motivate them. “One game, during half time when we were having trouble pulling ahead, the captains brought us together and went around and told each of us something we were doing well. It really helped us win.”

All coaches have their personal styles, but the tradition of the motivational pep talk continues onto the track. Coach Laddie Lawrence keeps his talks calm. “I don’t yell, I don’t scream, I don’t swear,” said Lawrence.

Instead, Lawrence energizes his racers by telling a special, motivational story, either about himself or a former Staples student who exceeded expectations. One such story involves a former student who collapsed 50 meters from the finish line. After being unable to get up off the ground, the racer crawled to the finish line and because of his brilliant effort, the team won the meet.

Whatever the style of the speech, they all have one thing in common; it’s all about showing the players what is possible for them, and looking at them, and saying in the words of Al Pacino, “So, what are you gonna do?”