Staples Takes Down Number One 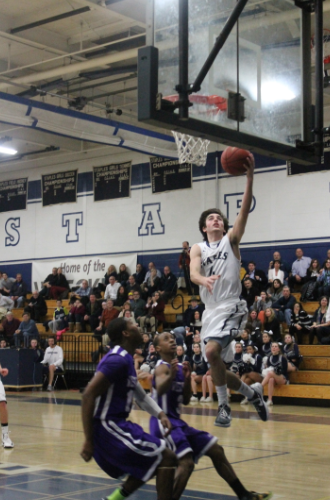 Senior James Frusciante goes up for the lay-up against West Hill.

In what some are calling the biggest win in school history, the Staples Wreckers overcame a slow start to take down the No. 1 team in the FCIAC, the Westhill Vikings, 53-50 in a home basketball matchup.

Point guard and co-captain James Frusciante ’13, after suffering a second quarter head injury when he hit the floor following a hard foul, recovered to finish with 16 points. He joined forward Ross Whelan ’13 who scored 13 in arguably his best game of the season, complementing leading scorer and co-captain Peter Rankowitz well, who netted 23.

“To knock off No. 1 is a huge confidence booster for us,” David Katz ’14 said, who along with Joe Greenwald ’13 and Nicolaas Esposito ’15 saw some time off the bench. “We really played as a team.”

Added Whelan, “This win shows the league that we are the real deal.”

The freshman CJ Donaldson had 14 points for Westhill, including two three pointers. The Cassamajor twins, Yveson and Guyveson, had uncharacteristically quiet games, combining for just 12 points.

Westhill’s lone previous loss this season came during the Holiday Tournament to Bassick, which does not count toward the FCIAC standings seeing as though it was not a regular season game. Staples, with five games remaining, will take on the Bears from Bridgeport to close their regular season on Feb. 20.

As far as the FCIAC tournament goes, the Wreckers are close to clinching a spot in the eight-team festival. They are now a half game behind Norwalk, goo for 7th, while Westhill slumped to a three-way tie for first, alongside St. Joseph’s and Trinity Catholic.

This may have been the best overall defensive effort from the Wreckers up to this point, as forward Darryle Wiggins ’14 had several key blocks, and Rankowitz and Whelan combined for a steals total well into the double digits.

“That shows how athletic we are as a team,” Whelan said of his squad’s defensive performance. “It really got our transition offense going.”

The Wreckers are still looking to improve their postseason positioning, however; they are not content with the seven seed.

“Of course beating the number one team in the FCIAC is great,” guard Jake Melnick ’15 said. “But we don’t want to stop here. I think this win is a great momentum builder for us going forward.”