Let There Be Lights 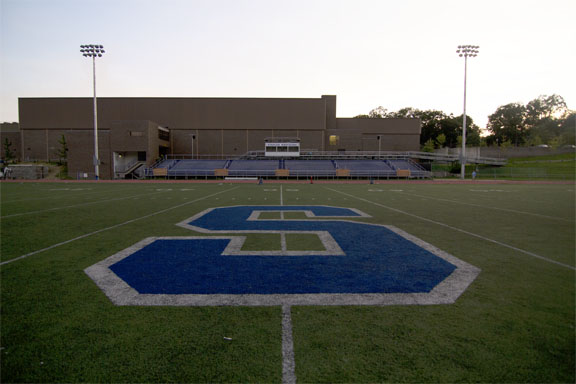 Lights will change the Staples sports landscape with the addition of night games.

While all new transfers and rising freshmen will strengthen the Staples football program, four shine above the rest. But these rookies will introduce a new era in Wrecker sports history.

These hulking metal posts overlook the field, each one standing the better half of 100 feet high. Stationed atop each tower sit 12 lights, ready to provide the illuminating force for a football game under the hallowed Friday Night Lights.

“When you actually see them, it’s incredible,” said Head Coach Marce Petroccio. “We’ve waited a long, long time for this.”

This coming season will be Petroccio’s 20th coaching the Wreckers, and, as he puts it, the issue of the lights on the field has been around even longer than his tenure.

Athletic Director Marty Lisevick supports Petroccio’s claim, as he maintains that in his 13 years as athletic director there have been three efforts to try to bring lights to the field. Up until now, all efforts had failed.

“There was no way we were going to succeed until culture changed. People who were for lighting the fields are around now who weren’t around then,” Lisevick said. “No matter how many times you brought it up before, we were going to get shut down.”

It wasn’t until last year that the road to lighting was ultimately paved via a unanimous decision by the town’s Planning and Zoning Commision. The decision came on the heels of the school finally reaching an agreement with the residents of neighboring homes in the area who had long been opposed to the prospect of the bright lights and loud noises that Friday night games would entail.

According to Lisevick, the agreement stands as an “unlimited use” policy until 8 p.m. The only exception to this rule is if a “special event” is arranged beforehand which, Lisevick says, would be “a starttime at 7 o’clock and turning the lights off around 10.”

“I’ve already gotten requests for the event space, including things like a girls’ track fundraiser,” Lisevick said. “But what I’m focused on is taking ample advantage of the unlimited use. To get that passed in the first place was huge; now it’s time to use it.”

But these lights aren’t only for Staples’ teams. While football, girls’ and boys’ lacrosse, track, field hockey, and rugby will exploit the new system, so too will youth sports leagues in town. According to Lisevick, along with the potential for extended intramurals, four PAL double-headers are already scheduled to be using the lights.

“The opportunities that are being presented now to the kids here at Staples, as well as the kids here in town, are well overdue,” Lisevick said.

However, one team that is not jumping at the chance to book a game under the lights is the boys’ soccer team. According to Woog, this is due to three reasons.

Along with the obstacle of the objecting neighbors, finances were also an issue. While “phase two,” as Lisevick calls it, has yet to garner the support needed to be executed—this phase would consist of revamping the concession stand and scoreboard—he says the lights themselves cost around $300,000, money raised mostly privately by the team booster clubs.

To turn these lights on, according to Petroccio, the process is remarkably new-age: an app. Petroccio says all it takes is the “press of a button and the dial of a number, and on they go.” Additionally, he says the lights come pre-set, meaning they should be “perfect” upon arrival.

Each of the four light banks, according to Lisevick, consists of 12 lights, totalling 48 lights around the field. During games, all 48 will be on, and with “security lighting” only eight will burn, which will be on until 8 p.m. when there is no scheduled activity on the field.

However, according to Petroccio, possibly the most integral function of all is the “practice mode.” This setting will switch on half of the lights, illuminating the field enough to practice during daylight savings time.

According to Petroccio, in the past the team has come inside to use the fieldhouse to practice. However, this would occasionally become unavailable, forcing the team to load onto buses and travel as far as New Canaan, Fairfield, or Wilton.

“It was a logistical nightmare,” Petroccio said. “By the time we got to practicing it was 5, we’re done by 8. The kids are tired, they’ve got homework to do. Now, fortunately, we’re done with that.”

And, while practicing on the field is an innovation in itself, Petroccio accentuates another perk as a premier benefit.

“Before this, we couldn’t play a home game in the playoffs,” Petroccio said. “We’ve made the playoffs 10 of the last 11 years—home field advantage is a big advantage to own.”

Since state playoff games are required to be played under the lights, the last home playoff game came in 2004 when Staples brought in portable lights. Before that, the last was 2002 when the ESPN GameDay lights were trucked in. Now with the permanent lights, according to Petroccio, every game will have a playoff atmosphere.

“I’m excited, and of course the team’s excited,” Petroccio said. “But really it’s the community that’s excited, too.”

This excitement spreading through the community is reason for Lisevick to believe that the estimated average game attendance of 1,500 from last season could jump tremendously this year.

“Parents will be there now, kids can come at night after their own busy days,” Lisevick said. “I think I can safely say we’ll get 50 percent more turnout than we generally draw.”

“I think the night atmosphere will positively affect the fans,” Felman said. “It makes the game feel more professional and special as compared to a typical high school day game. It allows fans more time to prepare for the game and to get excited.”

To Petroccio, even with the benefit of better practices and home field advantage for the playoffs, the spike in attendance could hold the greatest value of all.

“There is nothing quite like having a couple thousand people in the stands for the first game of the season. We really couldn’t ask for anything more,” Petroccio said. “If you can’t get excited about that then you’ve got to get your saliva checked.”

This first game falls on Sept. 14 against St. Joe’s, followed by a matchup against Bridgeport Central under the lights on Sept. 21, and followed again on Sept. 28 with a game against McMahon.

“When we come out that locker room door, it should be electric,” Petroccio said. “People are going to be there who have never seen Staples football before just because they’re excited to see this team out under the lights.”

And Petroccio is just as excited as the rest of these new fans.

“Saturdays were good, but the crowds weren’t quite what they should be,” Petroccio said. “Friday nights give people something positive to do, and I couldn’t be more excited.”