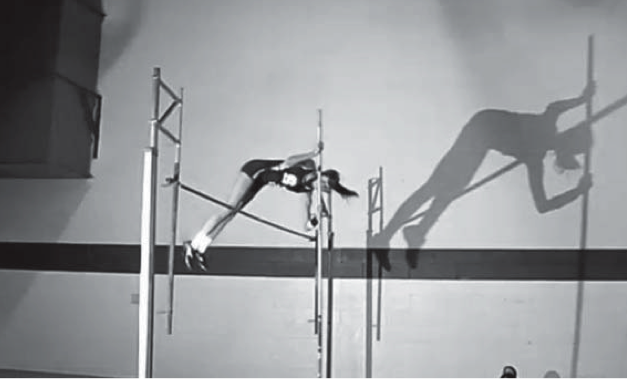 LIFTOFF: Lexie Schachne ’12 breaks the school record with a jump of nine feet and two inches. [Her current best at 10 feet] and has set a goal to reach 10 feet six inches. | Photo by Faith Schachne 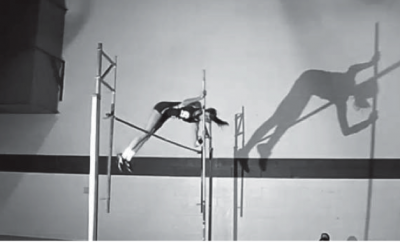 Lexie Schachne ’12 started pole vaulting her freshman year, and now she has broken the Staples record for the fifth time this year.

The best record so far in history is a jump of 6.5 meters, which is a little over 21 feet.

Before Schachne broke the record at Staples, Lauren Baker had held the best record for pole vaulting in the year 2000 with a height of nine feet.

“Pole vaulting takes speed, strength, and skill,” Schachne said. She explains that in order to be successful with the jump, speed is necessary to run down the runway. This builds up energy that will be transferred into the jump.

Finally, the fifth time, and the standing best record for Staples, Schachne broke her own record on Feb. 20, with jump at a height of 10 feet.

Schachne discussed that the training for pole vaulting is not easy and takes a lot of endurance and dedication.

“On Mondays, the other female pole vaulters and I have a sprinting workout with the rest of the track team and then on Wednesdays, we go to the weight room to work on our upper body strength,” Schachne said. “On Tuesdays and Thursdays, we pole vault.”

Laddie Lawrence, the boys’ cross country coach, explains that along with the girls’ record broken this year, the boys’ pole vaulting record was broken as well, by Paul Chandler ’10 with a height of 14 feet and six inches.

“Not only are they both good athletes, but this is also an indication of the quality coaching Andrew [Lawrence] provides our pole vaulters,” Lawrence said.

The pole vaulters are coached with sprinting by Jesse McCray, and coached for pole vaulting by Andrew Lawrence.

According to Schachne, her coaches are great and Coach Lawrence has a lot of experience with pole vaulting.

Her family was proud of her for doing so well.

“I was very happy for her,” Schachne’s mom, Faith Schachne, said.

Faith went on to explain that she was not surprised at all that Lexie broke the record because she had worked so hard to get there.

“Lexie loves pole vaulting and so she works really hard to do the best she can do,” Faith said.

Although Lexie has accomplished her goal of breaking the record Lauren Baker held, she still wants to improve on her pole vaulting.

Lexie’s next goal for the season is to reach a height of 10 feet and six inches.