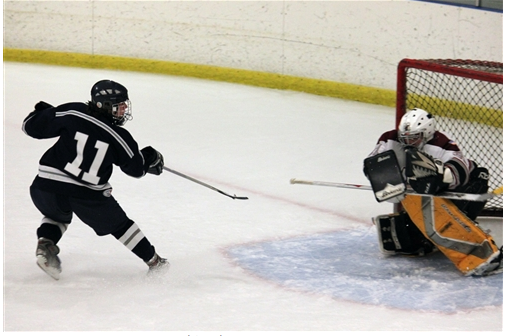 After a fast paced, back and forth game against Westhill on Saturday Jan. 16, the Staples-Weston boys’ co-op hockey team was ultimately defeated. The 2-6 Wreckers faced the 6-2 (now 2-7 and 7-2 respectively) Westhill Vikings. Despite their records, the Wreckers and Vikings were quite evenly matched.

“There wasn’t anything more I could have asked of my players, they left everything on the ice,” said head coach Ralph Unker. The boys were relentless throughout the entire game, and never gave up.

“They [Westhill] were definitely not as good as their record reflected,” said tri-captain Mike Zaken ’10 from Weston High School. “They didn’t look sharp and I thought we had a good chance from the start.”

The first period started with two quick goals from Westhill early in the period. However, the Wreckers did not let this get them down. Aaron Liu ’12 scored the first goal for Staples, assisted by alternate captain Kyle Wehmhoff ’12.

Later in the period, on a power play with four minutes left, defenseman, tri-captain Danny Carbone ’10 then tied the game with a powerful shot from the blue line.

The Vikings then retaliated and scored once more with only a minute left in the period putting them ahead by one.

Starting the second period with just as much motivation and intensity as the first, Liu scored again, assisted by Carbone, to tie up the score.

“We really capitalized on our chances and that is what kept us in the game,” said Liu.

Looking to put themselves ahead on the scoreboard, goalie, tri-captain Clay Englehart ’10 skated off the ice in order to put in a 4th forward on. However, Englehart returned only a few seconds later during a stoppage of play. This was Englehart’s first game back after an injury that prevented him from playing for three weeks.

Unfortunately Westhill broke the tie, and led by one for about two minutes, but Wehmhoff was soon able to put the puck in the net and tie the score once again. Liu and Zaken assisted Wehmhoff, ending the second period at a 4-4 tie.

“Every goal we scored was an incredible work of art,” said Unker.

The Vikings started the third period with a bang, scoring two goals only 10 seconds apart in the first five minutes, giving the Staples icemen a tough challenge. Yet the Wreckers did not admit to defeat until the buzzer sounded. Wehmhoff was able to score another goal for Staples, assited by Liu, before the Vikings put their final goal in the net with a minute left in the game.

However, this was not enough to take the win and the Wreckers walked away with an unfortunate 7-5 loss.

As far as effort goes, this game was not a loss. “I could not be prouder,” said Unker, “We never quit. Especially Kyle, Aaron, and Danny who stayed on the ice without a break when I really needed them to.”

The team is certainly improving and becoming a much higher threat, something Unker hoped would happen as the season progressed. “We’ve come so far. We’re really starting to act like a team now, and piece-by-piece we’re putting it together. Our work will pay off,” said Carbone.

Their practice shows as three of the five goals scored were from a drill the team had worked on during the week. “The drill translated directly to the game,” said Unker.

The co-op team will face their next opponent, Trinity Catholic, on Tuesday Jan. 19 at Terry Conners Rink in Stamford.