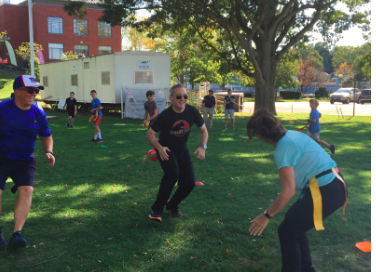 The event was organized by the Westport Youth Commission, and is modeled after Dodge-A-Cop, a game of dodgeball between high schoolers and officers. Both of these events are designed as opportunities for kids to meet local officers in a casual setting. Westport Youth Commission invited middle schoolers to play with off-duty officers.
The game began at 3:30 and after the game, kids and officers were rewarded with pizza.

“By playing a game of capture the flag with Westport police, middle schoolers see that the police are no one to be wary of; [they’re] just normal adults,” Lilly Weisz ’23, Westport Youth Commission member, said.

The Westport Youth Commission believes it is important for students to recognize officers and form relationships.

Admission was free, but participants were encouraged to donate $5 towards the ALS Therapy Development Institute. The donations honor Westporter Patty Haberstroh who suffers from ALS.

All Westport middle schoolers are invited to participate next year.

“This is still one of our newer programs, so we’re still figuring out what works and what doesn’t,” Kevin Godburn, Westport Town Youth Services Director, said. “Overall, it’s always a fun event and the feedback from both police and students has been largely positive.”

The event fostered a positive relationship between students and police.

“It was really great to see all of the middle schoolers running around and laughing with the cops, you could really tell that everyone was having so much fun,” Weiszjik said. “Next year I hope even more kids could come and join in playing Capture-A-Cop.