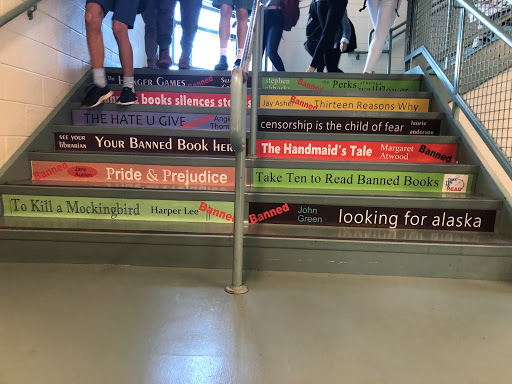 The Staples High School Library has been participating in the National Banned Books Week throughout this week. The library staff has promoted several banned books with large stickers between steps on the main staircase, such as “13 Reasons Why”, “Pride and Prejudice”, and “The Handmaid’s Tale”.

According to bannedbooksweek.com, “National Banned Books Week was launched in 1982 in response to a sudden surge in the number of challenges to books in schools, bookstores and libraries.”

As stated in the American Library Association’s website, banned books are books that mention a form of political, religious, legal or moral disagreements. Often times libraries or stores will not carry the books or make them less available to readers.

The Staples Library is working to ensure that students have the freedom to read whatever books they would like.

“Usually public or school libraries will challenge banned books,” the school librarian Mrs. Weinberg said. “We want to raise awareness about the fact that people try to ban others’ work and cencorize their stories,” she continued. “We believe that students shouldn’t be closed off from knowledge.”